Virus jumps from monkey to scientist
October 27, 2010 at 1:19 am Robert Zimmerman Points of Information

Treaty language being written at a United Nations conference on biodiversity is so vague it threatens to bar almost all new development. Here is the language, via Science:

8 (w) Ensure, in line and consistent with decision IX/16 C, on ocean
fertilisation and biodiversity and climate change, in the absence of science-based, global, transparent and effective control and regulatory mechanisms for geo-engineering, and in accordance with the precautionary approach and Article 14 of the Convention, that no climate-related geoengineering activities (1) that may affect biodiversity take place, until there is an adequate scientific basis on which to justify such activities and appropriate consideration of the associated risks for the environment and biodiversity and associated social, economic and cultural impacts, with the exception of small scale scientific research studies that would be conducted in a controlled setting in accordance with Article 3 of the Convention, and only if they are justified by the need to gather specific scientific data and are subject to a thorough prior assessment of the potential impacts on the environment.

(1) Without prejudice to future deliberations on the definition of geo-engineering activities, understanding that any technologies that deliberately reduce solar insolation or increase carbon sequestration from the atmosphere on a large scale that may affect biodiversity (excluding carbon capture and storage from fossil fuels when it captures carbon dioxide before it is released to the atmosphere) should be considered as forms of geoengineering which are relevant to the Convention on Biological Diversity until a more precise definition can be developed. Noting that solar insolation is defined as a measure of solar radiation energy received on a given surface area in a given hour and that carbon sequestration is defined as the process of increasing the carbon contact of a reservoir/pool other than the atmosphere. [emphasis mine]

This language is so broad that, if agreed to by the United States, it could easily put almost any activity that affects the environment, including technology, business, property, recreation, or practically anything at all, under the control of UN regulators.

But wait, there’s more. The goal of this UN conference, to quote their own webpage, is to achieve “a significant reduction of the current rate of biodiversity loss at the global, regional and national level as a contribution to poverty alleviation and to the benefit of all life on Earth.” Obviously, this UN group is not merely interested in protecting the biodiversity of life on Earth, but to also redistribute the wealth so as to help poorer nations.

God help us if our government agrees to this.

Is this a hint of what’s to come on Tuesday? Toronto yesterday not only elected a conservative mayor by a very large margin, four incumbent councillors were also defeated soundly. Key quote:

Polls, indicating the race was razor edge close, were proven false in 11 single minutes! . . . [The conservative] Ford won with 383,501 votes—more than the votes of his two main opponents combined.

Save that date! November 19 has been set for the first test of beer drinking in zero gravity.

Scientists released additional Kepler results [pdf] today, this time describing what they are learning about the stars being observed rather than any planets that might be orbiting them. In studying each star’s minute variations of light, the astronomers can track how the star itself is oscillating like a bell ringing. From this they can do a kind of stellar seismology, finding out a great deal about what is going on inside the star. The data has thus:

Hubble data used to look 10,000 years into the future.

Spaceport dedication in New Mexico
October 26, 2010 at 10:33 am Robert Zimmerman Behind The Black

Mike Shinabery, a fellow science writer who also writes for the New Mexico Museum of Space History, attended the dedication ceremony this past weekend of the new spaceport located about 45 miles north of Las Cruces, New Mexico. He took some pictures and kindly forwarded them to me. Below is a shot of Virgin Galactic’s WhiteKnightTwo, carrying SpaceShipTwo, as it approached for landing. 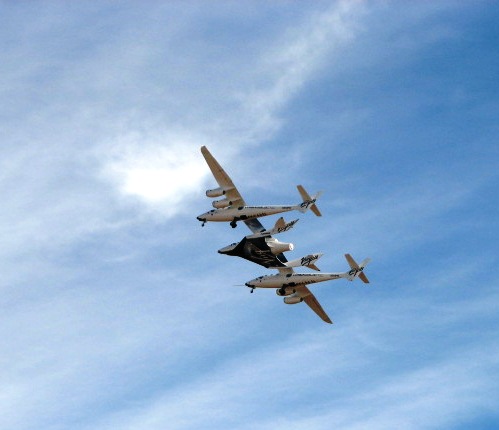 More photos below the fold. END_OF_DOCUMENT_TOKEN_TO_BE_REPLACED

Tsunami and volcano hit Indonesia
October 26, 2010 at 10:08 am Robert Zimmerman Points of Information

Bad news from Indonesia: A tsunami killed 108 at the same time a volcano eruption has forced thousands to flee.

Obama takes the money and runs
October 26, 2010 at 9:47 am Robert Zimmerman Points of Information

These politicians are such jerks! A family in Rhode Island put together a fancy “Dinner with Obama” to raise money for Democrats. Obama arrives, collects the money, and then skips out before dinner. And why couldn’t Obama stay? This is what he said, just before everyone else sat down to eat,

“I’ve got to go home to tuck in the girls and walk the dog and scoop the poop,”

Bloomberg supports term limits for everyone else but himself
October 26, 2010 at 9:38 am Robert Zimmerman Points of Information

This illustrates why much of today’s political class, from both parties, needs to go: New York mayor Michael Bloomberg supports term limits for everyone . . . but himself.

The 123,000 MPH Plasma Engine That Could Finally Take Astronauts To Mars
October 26, 2010 at 9:29 am Robert Zimmerman Points of Information

The 123,000 MPH plasma/nuclear engine and the astronaut who is building it.

ISS to dodge space junk
October 26, 2010 at 9:21 am Robert Zimmerman Points of Information

Russian mission controllers have shifted the orbit of ISS about a half mile in order to avoid an unidentified piece of space junk.

Why this election is important
October 26, 2010 at 9:13 am Robert Zimmerman Points of Information

Mark Steyn explains why next week’s midterm election and what the next Congress does has very special significance. Key quote:

In a two-party system, you have to work with what’s available. In America, one party is openly committed to driving the nation off the cliff, and the other party is full of guys content to go along for the ride as long as we shift down to third gear. That’s no longer enough of a choice. If your candidate isn’t committed to fewer government agencies with fewer employees on lower rates of pay, he’s part of the problem. This is the last chance for the GOP to restore its credentials. If it blows it, all bets are off for 2012.

Another European on trial for reporting the facts about Islam

Freedom of speech alert! Geert Wilders is not the only European on trial simply for reporting factual information about Islam and the Koran. In Vienna, Austria, feminist and anti-jihad activist Elisabeth Sabaditsch-Wolff faces prison simply because she conducted “public seminars in which she described Islamic doctrine, quoted from the Koran, and explained to her listeners what she considers the dangers of Islam.” Her trial date is now set for November 23. More information can also be found at Jihad Watch.

The website Gates of Vienna has started a campaign to support Sabaditsch-Wolff, and is asking websites and bloggers worldwide to support her. I am glad to lend my voice to her cause. Any government that wants to put a citizen in jail, merely for expressing an opinion or stating facts, should be condemned as loudly as possble. If you go to the campaign site above, you can read about the history of the case in detail as well as find ways you can lend your own support. Also, Elisabeth Sabaditsch-Wolff’s legal defense fund can be found at http://english.savefreespeech.org/ .

Two companies who are offering suborbital tourism space flights have indicated that the price per ticket could drop by 2011.

The commercial half of NASA’s future manned program is moving foward. The agency today began soliciting bids for “launchers and spacecraft that would transport astronauts to and from low Earth orbit destinations on a commercial basis.” Contract awards are expected by March 2011.

An evening pause: From Yellow Submarine (1968). Some trivia: the dialogue was spoken by actors, not the Beatles.

The leak on the space shuttle Discovery appears fixed, and NASA managers have confirmed the launch date as Monday, November 1, 4:40 pm (Eastern). This will be Discovery’s last flight.

The calla lillies are in bloom again

An evening pause: This scene, from Stage Door (1937), is considered by many to be Katherine Hepburn’s greatest film moment: “The calla lillies are in bloom again.” Though powerful on its own, in the full context of the movie the scene is even more heart-breaking, and a true tour de force for Hepburn.

The once and future Moon
October 24, 2010 at 7:07 pm Robert Zimmerman Points of Information

Richard Branson, President of Virgin Galactic, says that his company plans to compete in the upcoming race to develop orbital space vehicles.

We’re a couple of swells…