Oink! The National Organization of Woman is demanding that President Obama reject the Social Security recommendations of his Fiscal Commission.

NPR says it’s ‘imperative’ that its federal funding not be cut
November 11, 2010 at 4:51 pm Robert Zimmerman Points of Information

Will the squealing never stop? NPR says it’s ‘imperative’ that its federal funding not be cut.

Engineers have apparently found the cause of the leak in the hydrogen fuel line to Discovery’s external tank.

More squealing of pigs! The advocates for commercial space are screaming about the spending cuts proposed by the White House’s deficit reduction commission.

Less Than Half of American Muslims Support the Ground Zero Mosque
November 11, 2010 at 10:42 am Robert Zimmerman Points of Information

Is this good or bad? Less than half of American Muslims support the Ground Zero mosque.

The Bashing of American Exceptionalism
November 11, 2010 at 10:40 am Robert Zimmerman Points of Information

The bashing of American exceptionalism.

It appears the outrage over the TSA’s new security measures is growing.

Take a look at these spectacular images China released from its Chang’e 2 lunar probe that they say show potential landing sites for later Chinese probes.

As if budget cuts and budget overruns are not enough, the Senate Commerce, Science, and Technology committee announced today it will hold a hearing on NASA’s future on November 18. More here.

Orbital Sciences today successfully completed the first test of the first stage engine for its Taurus II rocket, the rocket the company plans to use in sending cargo to ISS.

Bad news for that November 30 shuttle launch date: Two cracks have been found on the aluminum body of Discovery’s external tank.

The James Webb Space Telescope is in trouble again, requiring an addition $1.5 billion and an additional year to get finished.

An evening pause: Global warming, from a somewhat different perspective. Those who remember the 1960s TV show, The Monkees, will especially appreciate the humor of this video.

Am I clairvoyant? Clark Lindsey notes how Obama’s National Commission on Fiscal Responsibility and Reform is recommending a $1.2 billion cut from NASA’s private commercial space budget.

Pat Condell on the death of free speech in Europe

Pat Condell, whose never minces words in his commentary on youtube, has decided to speak out about Elisabeth Sabaditsch-Wolff’s upcoming trial in Austria, where she is threatened with three years imprisonment because she expressed an opinion about Islam and the Koran. It is worth watching.

The purpose [of these trials] is to silence dissent, by example. To show everyone else that they too will be treated as a common criminal if they dare to express a negative opinion about the world’s most backward, intolerant and violent religion. This is where we are in Europe today. It’s like something out of the old Soviet Union.

By the way, Elisabeth Sabaditsch-Wolff’s legal defense fund can be found at http://english.savefreespeech.org/ .

And people wonder why I now drive from Maryland to Chicago: It appears that no one is happy with new TSA airport security checks, requiring either a full body scan or a full body pat down. Protests are coming from pilots, flight attendants, passengers, and the airlines. Key quote from the “passenger” link above:

The aggressively enhanced TSA pat down involves over-the-clothes searches of passengers’ breast and genital areas. You can opt not to go through the backscatter body scanners, and thereby keep your genitalia private from pictures, but then a TSA screener will use a front-of-the-hand, slide-down body screening that Ars Technica called “nut-busting pat-downs.”

And there’s National Opt-Out Day, November 24, 2010. (I wish I could participate, but as I said, I will be driving to Chicago for Thanksgiving, mostly to avoid the police-state of the TSA.)

Highest point on the Moon
November 10, 2010 at 11:28 am Robert Zimmerman Points of Information

The highest point on the Moon.

Eat a Bagel, Lose Your Baby
November 10, 2010 at 9:47 am Robert Zimmerman Points of Information

Eat a bagel, lose your baby.

Cassini to be back in operation by November 24
November 9, 2010 at 11:24 pm Robert Zimmerman Points of Information

Engineers expect to get Cassini, which went into safe mode on November 2, back in operation by next week.

The state of the Iranian space program
November 9, 2010 at 10:47 pm Robert Zimmerman Points of Information

The up and down state of the Iranian space program.

At least one expert claims that the mystery missile launch off the California coast on was merely an optical illusion. Key quote:

John Pike of the security analyst group globalsecurity.org said the video shot by a news helicopter owned by KCBS is an optical illusion. Pike said the video is of an airplane heading toward the camera and the contrail is illuminated by the setting sun. He said the object can’t be a rocket because it appeared to alter its course.

The uncertainty of science, again! The three-horned dinosaur triceratops might never have existed, paleontologists say. Instead, it might simply have been the youthful stage of another less well know dinosaur called torosaurus.

An evening pause: Flash flood in the desert.

Pluto might be larger than Eris after all
November 9, 2010 at 5:30 pm Robert Zimmerman Points of Information

The uncertainty of science! Eris, the distant planet in the Kuiper belt, had been thought to be larger than Pluto. Now astronomers have doubts.

Feel the hate: Leftist cartoonist Ted Rall calls for armed revolution against conservatives. The quote below from Rall’s writing nicely summarizes what he thinks of people who disagree with him:

The millions of partisans who follow Fox News, Rush Limbaugh, and right-wing televangelists happen to be the best-armed people around, and they despise just about everyone who doesn’t think and pray like them. They will see collapse as affirmation of their beliefs that secular liberalism is destructive. They will also see it as an opportunity to create a new, ordered world atop the ashes. They will act to stop teenage sluts from getting abortions, teach niggers a lesson, and slaughter those spics, dots, and everyone else who doesn’t fit into their vision of what and who is right. [emphasis mine]

The space program is dead, long live the space industry!

The news following the midterm election results have not sounded good for NASA. Two stories on Monday alone signaled the bad news:

While Republicans have, since the 1970s, generally been more enthusiastic than Democrats about NASA and manned space exploration, the new Republican Congress has a tone that seems decidedly different from past years. Above all, it appears the public is finally becoming aware of the recent explosion in the federal debt, as illustrated by the graph below. (hat tip to Gateway Pundit and The Captain’s Comments.) 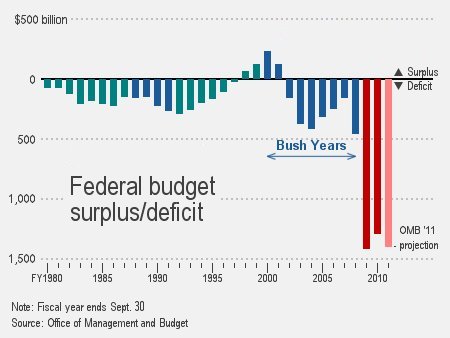 The public’s growing concern about these numbers was clearly reflected in the election results. First, there was the success of many tea party candidates advocating fiscal responsibility and a radical shrinking of government. Even in cases where conservatives lost, the closeness of the election in districts or states where liberals have rarely in the past been challenged suggests the mood of the electorate is decidedly shifting in a direction against federal spending.

Second, the electorate seemed surprisingly hostile to pork, expressing little interest in being brought off with baubles for their home districts. Thus, candidates who ran against pork seemed to get far more enthusiastic attention and positive publicity than those elected officials famous for “bringing home the bacon.”

In such an atmosphere, the priorities of Congress will be forced to change. The outlook therefore does not look good for the type of pork funding represented by the NASA authorization bill passed on September 29, with its billions of subsidies for the aerospace industry.

We can see an indication of this new tone by some of the initial plans announced by the Republican leadership. As a first step, the Republicans have proposed cutting the federal budget back 2008 levels. This change alone would reduce NASA’s annual budget by about $2 billion, or 10%.

This solution, however, will not close the budget gap, only shrink it slightly. The Republicans will still be faced with massive amounts of red ink and a public demanding that they deal with it. To prove they mean what they say, the new House leadership will be forced to propose some additional draconian cuts.

Unfortunately, the circumstances at this moment has made NASA a prime budget-cutting target. END_OF_DOCUMENT_TOKEN_TO_BE_REPLACED

Mystery rocket launch yesterday off of the California coast.

UN panel calls for more taxes in the name of climate change
November 9, 2010 at 9:24 am Robert Zimmerman Points of Information

Why does this sound fishy? A UN panel on Friday called for new taxes — on carbon emissions, air and sea transport, and international bank transactions — for a UN fund to help poor nations combat climate change.

More squealing! The chief of NPR (who fired Juan Williams because he spoke honestly about Islam) said Sunday that the threat by Republicans to defund NPR would be “devastating to public broadcasting.”