I have not only been fortunate to write about some of the most exciting moments in space history, I have also had the great and grand fortune to actually go where no one has gone before.

When I was college (around 1974) I stayed up late one night to watch the movie Citizen Kane. When the movie was over I was left breathless with wonder at its clarity of vision. Hungry to see more movies like this, I scanned the television dial and stumbled upon the opening shots of the classic and equally great MGM film, Grand Hotel.

For the next twenty years I dedicated myself to making movies, hoping to create films as entertaining and as meaningful.

Most of these movies were mindless, mediocre, and completely forgettable. By the mid-nineties I had had enough, and decided to change careers.

During these same years I was also cultivating other interests, almost all of which had to do with the human instinct for exploration. I got a master’s degree, studying early America colonial history because I was curious to learn how the most successful pioneer societies organized themselves. I followed the space program from childhood because I saw it as the future of the human race. (I also thought it was exciting and fun!)

And I got involved in cave exploration, because I simply didn’t have the math skills necessary to make it as a NASA astronaut but still had the desire to explore unknown territory. And from what I could learn, caving was the one physical activity in which it was still possible for ordinary people to go where no one has gone before. 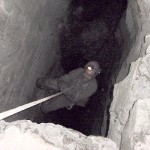 Since my first wild cave trip in 1984, I have explored hundreds of caves in the United States, Germany, Czechoslovakia, Russia, and Ukraine. I have been involved in a number of projects, pushing and surveying virgin cave passages, walking in places previously untouched by human hands. I have even become a cartographer, drawing the maps of the caves I have helped discover and survey.

Once, I was even trapped inside a cave for 10 hours because of a flood.

Even as I was having all these cool adventures, in 1996 I began the slow transition from movie-maker to full time non-fiction science writer. I had decided that — instead of making dismal, violent movies that said nothing positive about human nature — I would focus on telling the exciting stories of scientists, engineers, and astronauts in their never-ending efforts to push the limits of human experience, either as researchers trying to solve the mysteries of nature or as explorers trying to push the unknown.

Today, I have no regrets, having written four inspiring histories about the first forty years of space exploration as well as more than a hundred magazine and newspaper articles about the adventure of science and astronomy. (Even more important, the career change brought me to the Washington, D.C. area, where I was fortunate to meet my wife Diane, who makes everything I do worthwhile. At the same time I also became Bob KB3IWD, gettting my ham radio technician’s license.)

In the next two decades, the human race will begin the actual exploration and settlement of the solar system. I am honored to be able to tell that story, especially because the words I am writing are describing the founding heritage of all future generations — generations who will look back at Earth and see it only as the Old World.

Robert Zimmerman can be reached zimmerman at nasw.org