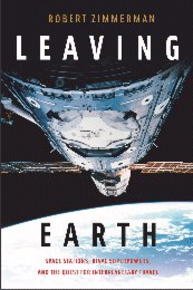 Now available as an ebook from all ebook vendors!

The ebook is available everywhere for $3.99 (before discount) at amazon, Barnes & Noble, all ebook vendors, or direct from my ebook publisher, ebookit.

A handful (now only 6) of autographed, hardback copies are still available, directly from the author, for $100, plus $5 shipping. To buy one, please send a $105 check, payable to Robert Zimmerman, to

The printed version of this book is now out-of-print, so when these are gone, new copies will no longer be available. Get yours while you still can! Moreover, the price will go up to $150 (plus shipping) after I sell the next book.

Winner of the 2003 Eugene M. Emme Award of the American Astronautical Society.

The award is given annually for the year's best space history book. As the AAS stated in its award statement:"Robert Zimmerman has done a masterful job. . . .Clearly written and compellingly argued, Leaving Earth offers important insights into what most experts regard as the future of space exploration."

"Leaving Earth is one of the best and certainly the most comprehensive summary of our drive into space that I have ever read. It will be invaluable to future scholars because it will tell them how the next chapter of human history opened." -- Arthur C. Clarke

"In this definitive account of man's quest to shoot for the Moon and beyond, award-winning science writer Robert Zimmerman details the adventure, exploration, research, and discovery of the world's first space cowboys and reminds us why courageous astronauts continue taking these daring flights." -- Mercury

"This is a scientifically vivid and intensely personal book that explores the people and their relationships as much as the technology. . . . It's a grand chronicle of an overlooked human adventure, and also asks some difficult questions about the direction of the current space program. Recommended for all space fans, and for historians too." -- Focus, December 2003

"Leaving Earth is a good read and perhaps the best source of information on a neglected part of space history: the experience of living and working in space for days and weeks at a time, often under trying conditions." -- John M. Logsdon, director of the Space Policy Institute at George Washington University in Washington, DC., in his review in Astronomy.

"A truly great book." -- David M. Harland, space historian and the author of numerous books on space, including The MIR Space Station: A Precursor to Space Colonization

"Space enthusiasts worried about where the manned space program is headed will take some heart from reading Robert Zimmerman's Leaving Earth: Space Stations Rival Superpowers and the Quest for Interplanetary Travel, in which the author tells how determined men and women have mastered, if not totally overcome, many of the hazards of living in space. . . . Mr. Zimmerman shows that engineers and astronauts have the ability to survive, and even thrive in space, to conquer everything that can be thrown at them by nature and their fellows. . . . The haunting question Mr. Zimmerman leaves us with is, does he have the will?" -- Washington Times, August 30, 2003. Read the full review.

"[Leaving Earth] will undoubtedly be the leading book on the Russian space station program for the foreseeable future." -- Publishers Weekly

"It is well researched, well written, and contains valuable insights into the interplay between national politics and space programmes. The book forms a useful backdrop to the debate on the present crisis in manned space flight, over its unclear objectives, increasing costs and declining public support. . . . Zimmerman provides many fascinating examples of the interplay between space, personalities, and Cold War politics. . . . Leaving Earth is the best analysis of its subject yet to be published." -- D.M. Ashford, writing in the Times Literary Supplement, January 9, 2004

"Leaving Earth offers perhaps the best single-volume history of space station development yet written. Given how unfamiliar most Americans, even those who consider themselves space advocates, are of Russian space history, this book does a valuable service by introducing them to the cosmonauts who pioneered space station development for decades." -- Jeff Foust, editor of The Space Review. Read the full review.

"Though [Leaving Earth] contains many of the technical issues of the designs of space stations as well as the sordid details of politics, its greatest provision is the human experiences that so richly embellish the story. You read of cosmonauts that try farming plants throughout the interior of their craft in efforts to yield a worthwhile harvest. There is a female fighter pilot/cosmonaut that ended up wearing a dress and being a hostess in space. Innumerable misses of docking craft demonstrate the riskiness of the whole affair. As well, the complete dependency on temperamental machinery constantly kept stark terror a scant distance away. Most of all though, the reader can see the triumph of human ingenuity and community where coming together is not just a convenience but a necessity." -- Mark Mortimer, Universe Today, September 28, 2004. Read the full review.

"This is a fascinating version of the history of one of the most fascinating areas of human space flight. The book is a 'must-read' even for veterans of the Russian and American space programs. As the first American member of a Russian crew, I thought I knew it all but the book revealed aspects of the Shuttle-Mir program and my Mir 18 mission of which even I was unaware. I found myself muttering 'So that's what was going on!' Be prepared to learn the 'real' story behind the race to the colonization of space." -- Norm Thagard, former NASA astronaut and the first American to fly on a Russian rocket as well as live on Mir

"Zimmerman's new work is at once exciting to read and an authoritative, meticulously researched history of long-term human presence in space. As the story unfolds, we visit the American Skylab, the seven Soviet Salyuts and Mir, and the evolution of tentative Freedom and Alpha designs to the current International Space Station. Especially intriguing are Zimmerman's brilliant interweaving of events on the ground--often political--with those of Mir crews in orbit, and his description of cultural trials facing Americans and Russians learning to work together in orbit. A literary tour de force." -- Frederick I. Ordway III, author of The Rocket Team and Wernher von Braun: Crusader for Space

With only 6 copies left of the now out-of-print hardback of Leaving Earth, I have raised the price to $100 for buying an autographed copy of this rare collector's item. That price goes up substantially after I have sold the next book and only have five left.