Conscious Choice:
The origins of slavery in America and why it matters today and for our future in outer space 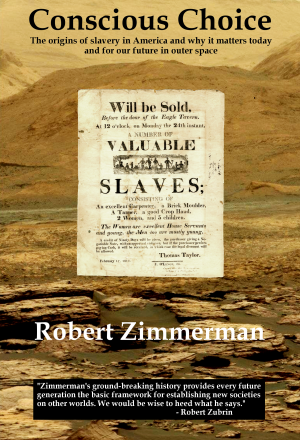 Now available as a hardback, paperback, or ebook!

“In Conscious Choice Robert Zimmerman has written the Who, What, When, Why and Where of slavery in America, with important lessons for the future of humanity.”
—Robert Pratt, long time radio host

“In its ‘1619 Project,’ a false and libelous narrative of America’s past has recently been promoted by the New York Times. In a useful corrective, Zimmerman’s book provides well-documented and new historical insights into the true history of slavery in colonial English America, with a cautionary warning for future settlers off the planet.”
—Rand Simberg, author of Safe is Not an Option

All editions available at Amazon, Barnes & Noble, and all ebook vendors. The ebook can be purchased direct from my ebook publisher, ebookit, in which case you don’t support the big tech companies and I get a bigger cut much sooner.

Autographed printed copies are also available at discount directly from me (hardback $24.95 or paperback $14.95; Shipping cost for either: $5.00). Just email me at zimmerman @ nasw dot org.

Or you can purchase the ebook directly from my ebook publisher here. If you do I get a bigger percentage and sooner.

Conscious Choice: The origins of slavery in America and why it matters today and for our future in outer space, is a riveting page-turning story that documents how slavery slowly became pervasive in the southern British colonies of North America, colonies founded by a people and culture that not only did not allow slavery but in every way were hostile to the practice. The book shows that slavery was never inevitable, and that the different response to the lure of slavery between the southern and northern colonies in America demonstrated this fact. While the evil of slavery grew and prospered in the south, in the north it was soundly rejected. Instead, the northern British colonies established free societies, so free that their descendants inevitably rose up to fight a war to end slavery in the south.

These are the same conflicts at the heart of today’s current events. Individual freedom, limited government, and personal responsibility are being constantly challenged by the modern cultural focus on power, race, identity politics, and a blind dependence on centralized government. By showing the contrast between those failed southern colonies and the rest of America, Conscious Choice will give modern Americans the historical background of their country that they need in order to make the right choices for the future.

Conscious Choice does more however. In telling the tragic history of the Virginia colony and the rise of slavery there, Zimmerman lays out the proper path for creating healthy societies in places like the Moon and Mars. As he writes in his conclusion,

As an American who has inherited the framework of Judeo-Christian-British culture, however, it is that culture that I know best. And as a historian who has looked at where this culture has both succeeded and failed, as illustrated by this very history you hold in your hand, I have come to the conclusion that this framework, when instituted correctly, works superbly as a foundation for future human colonies in space. …

So, to the future settlers of worlds beyond, I say: Build your future civilizations with families, aimed at raising children. Provide your citizens the right to private property while favoring at the beginning relatively small holdings. Encourage individual responsibility, liberty of conscience, and freedom. And above all, infuse your colonies with moral commitment, the insistence that truth, justice, and the protection of individual human rights are essential components of any new social order.

If you do these things, you will build well, and your descendants will thank you.

Or to paraphrase John Winthrop, you will become a city upon a hill, a byword throughout the universe.

The future is determined by actions taken in the present. We now need to make the right choices so that endless generations on worlds without end can have the same good life that our ancestors gave us.

What others are saying:

Douglas Mackinnon, author of the science fiction novel, The Dawn of a Nazi Moon:
“When humankind finally does venture forth to colonize the moon, Mars, and beyond, it is essential that each colonist have this book downloaded onto their tablet. It will guide them and most likely save them.”

James Bennett, author of America 3.0: Rebooting American Prosperity in the 21st Century:
“How was slavery born in the deep south of the United States? Robert Zimmerman’s book Conscious Choice provides the answer, in a well-researched, detailed, but readable book free of academic jargon. He shows in a clearly-presented thesis that slavery was not predetermined, as some historians hold, but was instead a series of conscious choices made during the founding period by key individuals of that day. He also shows that it was not necessary, as demonstrated by the decision of the northern British colonies to reject it.

“Zimmerman then uses this history to show how it provides lessons to future explorers when they found their own new colonies in space.

“I recommend this book for any reader who enjoys stretching his or her mental horizons.”

Haym Benaroya, author of Turning Dust to Gold: Building a Future on the Moon and Mars:
“Zimmerman has written a marvelous and unique history that makes wonderful connections which no one has done before.”

I really do believe that everybody needs to get a copy of Conscious Choice. It is that important a book. It is one of the most important books given today’s social upheaval.

There are lot of good histories out there, but they are mostly just retreads of the primary documents that we’ve read before. I get bored with them.

This book is new. This book is primary source history that will enlighten you and give you knowledge.

From a recent review at the website The Other McCain:

Not only is it a concise and very readable history of how and why slavery became an established part of society in the Southern states, it further explains why “the Peculiar Institution” did not also take root in the Northern states. … This book is useful for refuting the lies of the 1619 Project, for understanding the breakdown of civil society and public order in America today, and ultimately as a call to arms against allowing the same defects to poison the final frontier. Buy this and read it.