The Universe in a Mirror 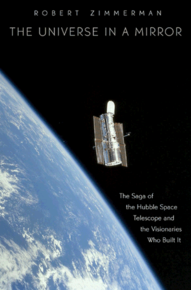 More than any other scientific instrument invented since Galileo first looked through a spyglass in 1609, the Hubble Space Telescope has helped to reshape our view of the universe. As I wrote in chapter 7, "Here was truth, staring us all in the face."

Yet the effort to build this space telescope was long, hard, painful, and often destructive to the individuals involved. It is my hope that with the publication of The Universe in a Mirror, some of that pain and loss can be repaired, and that the men and women who sacrificed much to make this achievement possible will get the credit they truly deserve.

"Zimmerman demonstrates the importance of vision, perseverance, politics, and good luck in getting this national telescope constructed, fixed, and operated. He also illustrates, somewhat poignantly at times, the human costs and disappointments that came up along the way." --J. Michael Shull, University of Colorado at Boulder

"For everyone who knows something of the story of the space telescope and its travails, this book provides a fascinating look behind the scenes. An excellent contribution to the history of technology." --Robert P. Kirshner, author of The Extravagant Universe

"Spectacular images of the cosmos from the Hubble Space Telescope have become so routine that it's easy to forget the astronomical community's despair in 1990, when NASA discovered that the main mirror was improperly shaped. In The Universe in a Mirror, Robert Zimmerman brings the visionaries behind this most remarkable of instruments vividly to life, taking us artfully through the decades--long minefield of lobbying, funding, design, construction, delay after the Challenger explosion and launch--and then through the Hubble's near-death experience as astronomers realized to their horror that its mirror was ground to the wrong shape. His meticulously researched but engaging prose makes it clear how remarkable an achievement the telescope actually was, and how easily it might not have happened at all." --Michael D. Lemonick, contributing writer to Time and lecturer at Princeton University

"Quite a story. I really liked this book." -- John Huchra, Harvard University

Read an interview of the author for Space.com.

Read an excerpt from the book describing two of Hubble's biggest discoveries.

Named to the long list of thirteen books eligible to win the 2009 Royal Society Prizes for Science Books.

Read my thoughts upon taking the Page 99 test for page 99 of "The Universe in a Mirror."

Check out the reviews on amazon.com's webpage.

With only 4 copies left of the now out-of-print hardback of Leaving Earth, the price is $150 for an autographed copy of this rare collector's item. That price will go up even more after I have sold the next book and only have 3 left.