Genesis, the Story of Apollo 8 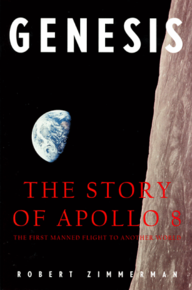 "The significance of the 1968 mission around the moon was not only scientific. As science journalist Zimmerman demonstrates here, in sending humans outside Earth's gravitational pull for the first time, the mission proved a major technological triumph; it was also a political triumph... With great intelligence and an eye for enjoyable reading, Zimmerman highlights a period in American history when everyday heroes still existed and we had not lost our capacity to be awed by scientific achievement."-- Publishers Weekly, 9/28/98

"Well-told... Provide[s] a unique perspective... Zimmerman's work is the first to cover this flight alone and to stress its monumental significance as the most important Apollo mission." -- Library Journal, 11/1/98

Zimmerman is accurate and thorough in his approach, giving the reader insights into Apollo 8 and the U.S. Space Program that might never have been told at the time. He weaves an exciting and thought provoking tale. . . . he not only tells the big picture - the politics, the Cold War, the titanic struggle between the Soviet Union and the United States and their "Race to the Moon" - but he vividly portrays the little pictures as well. --Destination Space (read the full review)

"Genesis captures the essence of the space race and the Apollo program." -- Frank Borman (Apollo 8 commander)

"The flight of Apollo 8 brought a shining ending to a year of turmoil. Zimmerman tells the reality of that story with vigor." -- Jim Lovell (Apollo 8 astronaut)

"Genesis: the Story of Apollo 8 successfully weaves together the flight to the moon with the political backdrop of that very troubled decade of the sixties." -- Bill Anders (Apollo 8 astronaut)

Check out the reviews on amazon.com's webpage.

Check out the excerpt available at msnbc.com.

With only 4 copies left of the now out-of-print hardback of Leaving Earth, the price is $150 for an autographed copy of this rare collector's item. That price will go up even more after I have sold the next book and only have 3 left.