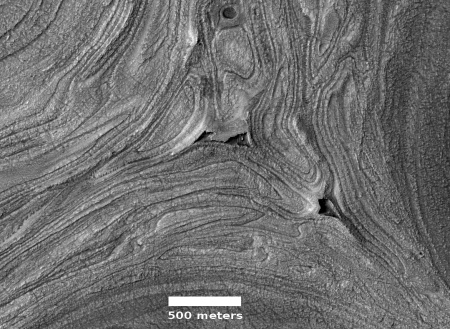 Cool image time! The photo on the right, cropped and reduced to post here, was taken by the high resolution camera of Mars Reconnaissance Orbiter (MRO) on May 2, 2018, and shows some very strange ripples and erosion features in one of the lowest elevation locations on Mars, inside Hellas Basin. If you click on the image you can see the full photograph, at full resolution. There are a lot of strange features here, so make sure you take a look at it. The ripples highlighted in the image are between what appear to be three lower basins, and seem to my eye to be ridges created as liquid ebbed and flowed in the basins, depositing material at the shoreline at repeatedly higher and lower levels. 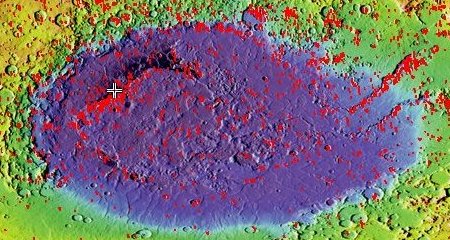 This particular location is not only in Hellas Basin, but it is also located in the deepest part of Hellas, a curved valley located in the basin’s northwest quadrant, as shown by the darker areas in the overview image to the right. The red boxes are other MRO high resolution images, with the cross indicating where this image is located.

This is the basement of Mars, what could be called its own Death Valley. The difference however is that unlike Death Valley, conditions here could be more amendable to life, as the lower elevation means the atmosphere is thicker. The ripples also suggest that liquid water might have once been here, a supposition supported by other low area images of Hellas Basin, most of which show a flattish dappled surface that to me resembles what one would think a dry seafloor bed would look like. The image in this second link also shows what looks like ghost craters that over time became partly buried, something one would also expect to happen if they were at the bottom of a lake, though this could also happen over time on Mars with wind erosion and the movement of dust.

It is also possible that these features come from lava events, so please take my theorizing here with a great big grain of salt. At the same time, recent results have found evidence of paleo lakes scattered all along the eastern rim of the basin, reinforcing the possibility that these were water filled lakes once as well.

Nonetheless, the ripples in the first image above are truly fascinating, as it is clear that at the highest peaks erosion has ripped those peaks away, leaving behind a hollow shaped by the ripples themselves. These features remind me of some cave features I have seen, where mud gets piled but by water flow, and then is over time covered with a crust of harder calcite flowstone. Later, water then washes out the mud underneath, leaving the curved flowstone blanket hanging in the air.