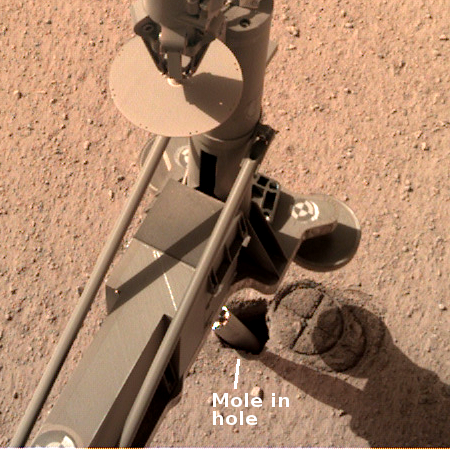 The Insight engineering team has successfully lifted the mole structure allowing them to see the hole the mole was pounding into the Martian ground in their effort to diagnose why the mole has been unable to drill more than a foot or so down.

The image to the right shows the mole, the white tubelike structure, inside the hole. As noted by Instrument Lead Tilman Spohn,

I along with others from the team were a bit shocked when we saw how large the pit actually is. Its diameter is about two times the diameter of the mole. The bottom of the pit is difficult to see (we expect better images once the lift is complete) but it seems that it is about 2-2.5 mole diameters deep. A mole diameter is 27mm. So the mole must have compacted the regolith quite a bit. In addition to its own volume it must have displaced about half of its buried volume.

There seems to be a little rim surrounding the pit but most of the displacement likely was compaction. We cannot see the inclination of the wall very well but it at least seems to me that the mole was “precessing” (like a spinning top) and carved a conical hole. This is consistent with the recordings of our tiltmeter STATIL during the hammering in March. We will have to wait for better images to confirm or disprove that. In any case, the apparent compaction seems to be compatible with a large porosity, relatively low density.

What they do next is unknown. From what I understand, they do not have the option of lifting the mole out and trying a different location. Moreover, the images and data suggest it wouldn’t matter anyway. The mole is apparently not designed to drill a shaft in this kind of ground.

In order to avoid a conflict at ISS with the Dragon cargo freighter that just docked there, SpaceX has now delayed the unmanned test launch of its first Dragon manned capsule by ten days, to no earlier than January 17, 2019.

The article at the link is mostly focused on describing the experiments and cargo that the cargo freighter just brought to ISS, but it includes these scheduling details involving the unmanned test flight:

The cargo Dragon is the only vehicle currently capable of returning experiments from the International Space Station and is in relatively high demand. Thus, the worms will either return aboard this CRS-16 Dragon or wait until spring when the CRS-17 Dragon departs the orbital outpost. Regardless, once the newly delivered science experiments and cargo are removed from Dragon, the International Space Station crew will pack the craft full of return cargo before closing Dragon’s hatch and releasing it from the Station in mid-January 2019 for return to Earth.

Presently, CRS-16’s unberth and landing date is set for 13 January 2019, which at the time of the mission’s launch set up a potential overlap between CRS-16 and SpaceX’s Demonstration Mission -1 (DM-1) for the Commercial Crew Program.

At the time of CRS-16’s launch, the uncrewed DM-1 test flight had been targeting a No Earlier Than (NET) launch date of 7 January 2019 from LC-39A at the Kennedy Space Center, with a docking to the International Space Station to follow on 10 January. That NET 7 January launch date officially slipped on Friday to NET 17 January.

I once again want to emphasize that the only thing that I see that might delay this launch is NASA’s effort to slow it down.

The Beatles – A Day In The Life

An evening pause: A wonderful song, but the images, most of which were taken during the recording session, will give you a taste of the wild, crazy, irreverent, and often foolish 1960s. Today, a half century later, we still are reaping the whirlwind of that decade, for good and ill.