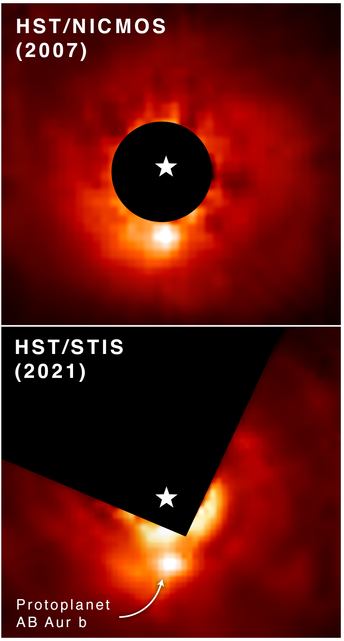 Astronomers, using a number of ground- and space-based telescopes, have now directly photographed the orbital motion of a Jupiter protoplanet orbiting a star 531 light years away over a thirteen year time span.

The image to the right, cropped to post here, shows images produced by two Hubble instruments. The caption:

Researchers were able to directly image newly forming exoplanet AB Aurigae b over a 13-year span using Hubble’s Space Telescope Imaging Spectrograph (STIS) and its Near Infrared Camera and Multi-Object Spectrograph (NICMOS). In the top right, Hubble’s NICMOS image captured in 2007 shows AB Aurigae b in a due south position compared to its host star, which is covered by the instrument’s coronagraph. The image captured in 2021 by STIS shows the protoplanet has moved in a counterclockwise motion over time.

From the paper’s abstract:

Using the Subaru Telescope and the Hubble Space Telescope, we find evidence for a Jovian protoplanet around AB Aurigae orbiting at a wide projected separation (~93 au), probably responsible for multiple planet-induced features in the disk. Its emission is reproducible as reprocessed radiation from an embedded protoplanet.

The accretion disk around AB Aurigae happens to lie face on to our line of sight, which facilitates these observations. The data also shows two additional potential proto-planets farther from the star.