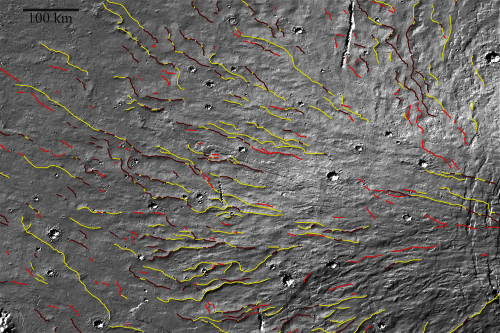 In a new paper detailing work they first began in 2019, scientists have now carefully mapped the extensive lava tubes that appear to radially descend westward from the caldera of Alba Mons, the volcano on Mars that has the largest surface area but with a relatively low peak.

The mapped population of 331 lava tube systems has a mean length of 36.2 km, with a total length in the western flank geologic map quadrangle of ∼12,000 km. Individual lava tube systems extend up to ∼400 km, and it is likely that some of our mapped lava tubes are connected such that the total number is actually smaller and lengths (average and maximum) longer. 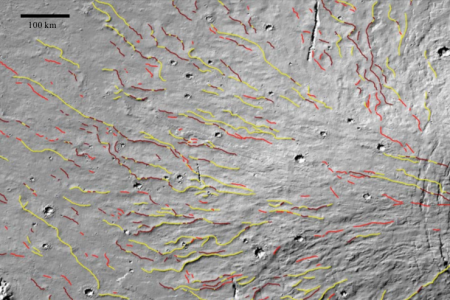 During oral presentations today at this week’s 50th Lunar and Planetary Science Conference in Texas, scientists revealed [pdf] a map showing what they believe are numerous lava tubes flowing down the western slope of the giant Martian volcano Alba Mons.

The image on the right is taken from their paper. The red lines indicate collapsed tube sections, maroon collapsed sections on a ridge, and yellow volcanic ridges, which I assume are external surface flows. From their paper:

Lava tube systems … occur throughout the western flank, are concentrated in some locations, and are generally radial in orientation to Alba Mons’ summit. Lava tubes are typically discontinuous and delineated by sinuous chains of elongate depressions, which in many cases are located along the crests of prominent sinuous ridges. Lava tube systems occur as both these ridged forms with lateral flow textures and more subtle features denoted by a central distributary feature within the flat-lying flow field surface. Significant parts of the sinuous volcanic ridges show no collapse features, indicating a distinctive topographic signature for Alba Mons’ lava tubes.

Alba Mons is in some ways the forgotten giant volcano on Mars.
END_OF_DOCUMENT_TOKEN_TO_BE_REPLACED