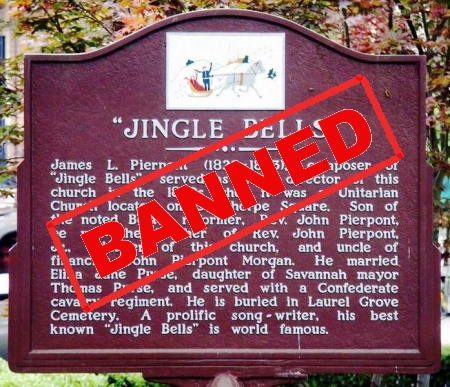 The administrators at an upstate New York elementary school, Council Rock Primary, have decided to ban the song “Jingle Bells” because it might be “controversial or offensive.”

“Jingle Bells,” explained Council Rock principal Matt Tappon in an email, has been replaced with other songs that don’t have “the potential to be controversial or offensive.”

…Allison Rioux, Brighton Central School District assistant superintendent for curriculum and instruction, offered a different reason for removing “Jingle Bells.” She wrote, “Some suggest that the use of collars on slaves with bells to send an alert that they were running away is connected to the origin of the song Jingle Bells. While we are not taking a stance to whether that is true or not, we do feel strongly that this line of thinking is not in agreement with our district beliefs to value all cultures and experiences of our students.

“For this reason,” Rioux concluded, “along with the idea that there are hundreds of other 5 note songs, we made the decision to not teach the song directly to all students.” [emphasis mine]

Rioux use of the weasel words “Some suggest” as her source for this ridiculous justification is of course another way of her saying “I’m making this up.” According to Kyna Hamill of Boston University, the foremost expert on the history of the song (and whose work the school cites as their justification for the banning),
END_OF_DOCUMENT_TOKEN_TO_BE_REPLACED