Using the ALMA ground-based telescope array in Chile, astronomers have detected two energetic “spots” that appear to be orbiting Sagittarius A* (pronounced A-star), the super-massive black hole at the center of the Milky Way.

The spots appear to be regions in the accretion disk surrounding the black hole that are emitting energy.

Their scenario is as follows. Hot spots are sporadically formed in the disk and circle around the black hole, emitting strong millimeter waves. According to Einstein’s special relativity theory, the emission is largely amplified when the source is moving toward the observer with a speed comparable to that of light. The rotation speed of the inner edge of the accretion disk is quite large, so this extraordinary effect arises. The astronomers believe that this is the origin of the short-term variation of the millimeter emission from Sgr A*.

The team supposes that the variation might affect the effort to make an image of the supermassive black hole with the Event Horizon Telescope. “In general, the faster the movement is, the more difficult it is to take a photo of the object,” says Oka. “Instead, the variation of the emission itself provides compelling insight for the gas motion. We may witness the very moment of gas absorption by the black hole with a long-term monitoring campaign with ALMA.” The researchers aim to draw out independent information to understand the mystifying environment around the supermassive black hole.

Everyone please repeat after me: Though this scenario makes sense, based on the facts and our knowledge, there is a lot of uncertainty about these conclusions.

Birth of a planetary nebula
March 5, 2020 at 8:49 am Robert Zimmerman Points of Information 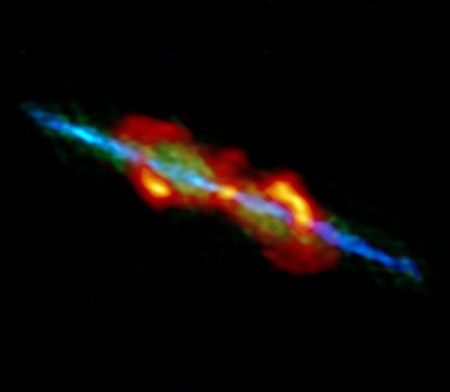 Astronomers, using the Atacama Large Millimeter/submillimeter Array (ALMA) telescope in Chile have created a multi-spectral radio image of a dying star in its very initial stages of becoming a beautiful planetary nebula.

[Using ALMA,] the team obtained a very detailed view of the space around W43A. “The most notable structures are its small bipolar jets,” says Tafoya, the lead author of the research paper published by the Astrophysical Journal Letters. The team found that the velocity of the jets is as high as 175 km per second, which is much higher than previous estimations. Based on this speed and the size of the jets, the team calculated the age of the jets to be less than a human life-span.

“Considering the youth of the jets compared to the overall lifetime of a star, it is safe to say we are witnessing the ‘exact moment’ that the jets have just started to push through the surrounding gas,” explains Tafoya. “The jets carve through the surrounding material in as little as 60 years. A person could watch their progress throughout their lifetime.”

Over time those jets, thought to be caused by the interaction of the central star with a smaller secondary star that orbits it, will interact increasingly with the surrounding gas. The result will be a quite spectacular planetary nebula. 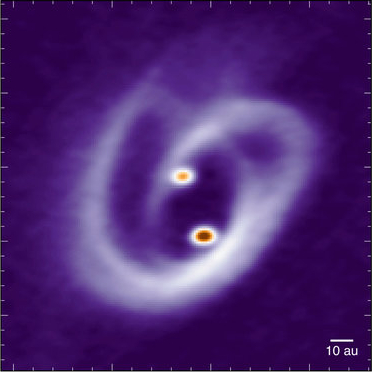 The make-up and temperature of Uranus’s rings
June 20, 2019 at 10:34 am Robert Zimmerman Points of Information

New radio images taken by the ground-based telescopes by the ALMA and VLT telescopes in Chile have allowed scientists to better determine the make-up and temperature of the rings of Uranus.

The image above is from their paper. From the caption:

From the article above:

The new images taken by the Atacama Large Millimeter/submillimeter Array (ALMA) and the Very Large Telescope (VLT) allowed the team for the first time to measure the temperature of the rings: a cool 77 Kelvin, or 77 degrees above absolute zero — the boiling temperature of liquid nitrogen and equivalent to 320 degrees below zero Fahrenheit.

The observations also confirm that Uranus’s brightest and densest ring, called the epsilon ring, differs from the other known ring systems within our solar system, in particular the spectacularly beautiful rings of Saturn.

“Saturn’s mainly icy rings are broad, bright and have a range of particle sizes, from micron-sized dust in the innermost D ring, to tens of meters in size in the main rings,” said Imke de Pater, a UC Berkeley professor of astronomy. “The small end is missing in the main rings of Uranus; the brightest ring, epsilon, is composed of golf ball-sized and larger rocks.” [emphasis mine]

The mystery is why this ring has no dust, something not seen with any other ring system in the solar system, including the inner rings of Uranus itself..

ALMA detects a solar flare on Mira 420 light years away
May 29, 2015 at 9:17 am Robert Zimmerman Points of Information 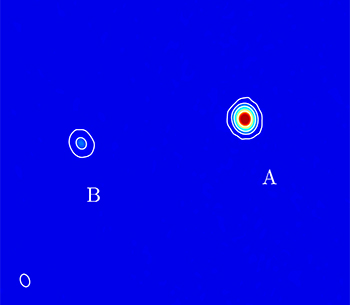 The just completed ALMA (Atacama Large Millimeter/submillimeter Array), a collection of 66 antennas located in Chile, has snapped a picture of the variable star Mira with its companion star, detecting details on the primary’s surface, including evidence of a solar flare.

Mira is a star with a mass like our Sun’s, but near the end of its life having evolved into a red giant that is shedding its outer layers. Being able to track its behavior with this kind of detail will allow astronomers to better hone their theories about the life and death of stars, including our own.

ALMA captures the rotation of the large asteroid Juno
April 7, 2015 at 8:52 am Robert Zimmerman Points of Information

The large ground-based telescope ALMA has captured a series of images of the large asteroid Juno, allowing scientists to estimate its rotation and overall shape.

Linked together into a brief animation, these high-resolution images show the asteroid rotating through space as it shines in millimeter-wavelength light. “In contrast to optical telescopes, which capture the reflected light from the Sun, the new ALMA images show the actual millimeter-wavelength light emitted by the asteroid,” said Todd Hunter, an astronomer with the National Radio Astronomy Observatory (NRAO) in Charlottesville, Va.

…The complete ALMA observation, which includes 10 separate images, documents about 60 percent of one rotation of the asteroid. It was conducted over the course of four hours on 19 October 2014 when Juno was approximately 295 million kilometers from Earth. In these images, the asteroid’s axis of rotation is tilted away from the Earth, revealing its southern hemisphere most prominently.

The best image yet of the birth of a solar system
November 6, 2014 at 8:43 am Robert Zimmerman Points of Information 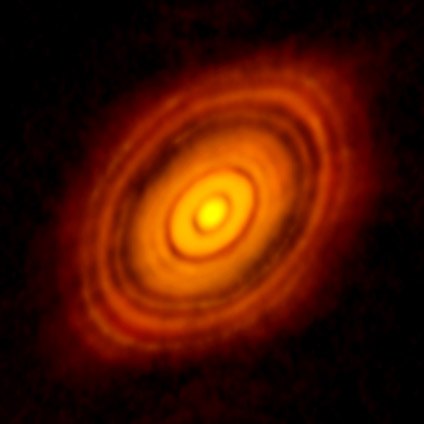 After more than two weeks the labor strike at the ALMA telescope array in Chile has ended.
September 9, 2013 at 3:52 pm Robert Zimmerman Points of Information

After more than two weeks the labor strike at the ALMA telescope array in Chile has ended.

A union strike has shut down the new ALMA telescope array in Chile.
August 26, 2013 at 4:25 pm Robert Zimmerman Points of Information

A union strike has shut down the new ALMA telescope array in Chile.

Astronomers today celebrate the official turning-on of ALMA, the world’s largest telescope.
March 14, 2013 at 8:57 am Robert Zimmerman Points of Information

ALMA is an array of 66 dishes tuned to wavelengths in the millimeter to submillimeter range of the electromagnetic spectrum, between the infrared and radio frequencies.

A Japanese astronomy professor has been found murdered in Chile.
May 9, 2012 at 8:09 am Robert Zimmerman Points of Information

A Japanese astronomy professor has been found murdered in Chile.

The ring and planets of Formalhaut 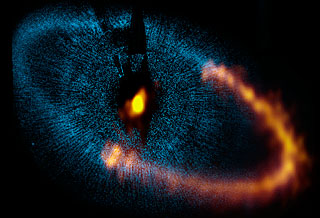 New observations from the new ground-based submillimeter ALMA telescope in Chile have given astronomers a clearer picture of the ring/disk of debris orbiting the nearby star Formalhaut. Moreover, the data suggests that two planets that are shepherding that ring are smaller than previously thought, no larger than a few times the size of the Earth.
END_OF_DOCUMENT_TOKEN_TO_BE_REPLACED

The world’s largest radio telescope has opened its eyes
October 3, 2011 at 9:24 am Robert Zimmerman Points of Information

The world’s largest radio telescope has opened its eyes.