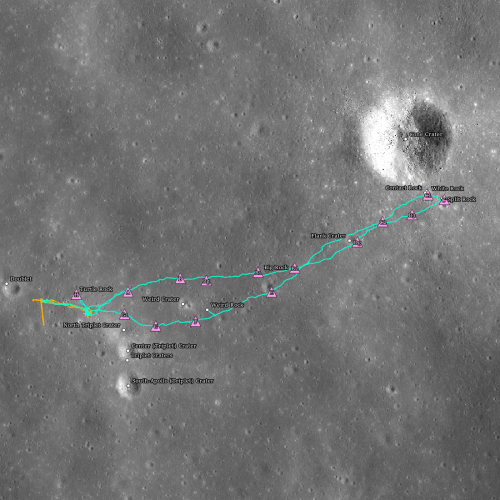 In honor of the fiftieth anniversary today of the landing of Apollo 14 on the Moon, the Lunar Reconnaissance Orbiter (LRO) science team has used images from the spacecraft to map out what the astronauts did on the surface, as shown in the reduced image to the right. The orange and teal lines indicate the routes followed during the two EVAs, with the pink triangles indicating stopping points along the way.

Unlike Apollo 11 and 12, which focused on engineering goals such as landing precisely on the Moon, Apollo 14 focused on addressing science goals. Antares (lunar module) landed in the Fra Mauro highlands, the original destination of the failed Apollo 13 mission, essentially taking on that mission’s objectives. This was the first crewed landing in the lunar highlands and not in the mare.

The Apollo 14 astronauts who landed on the Moon, Alan Shepard (Commander) and Edgar Mitchell (Lunar Module Pilot), completed two extra-vehicular activities (EVAs) while on the surface. They spent a total of 9 hours and 22 minutes setting up equipment, taking photographs, collecting samples, and exploring.

This was the last mission where the astronauts had to walk. The next three Apollo missions brought a rover with them, so that they could drive to their research sites.

The uncertainty of science: Scientists studying rocks brought back by the Apollo 14 lunar mission have concluded that one sample originally came from the Earth, and if so would be the oldest known Earth rock.

It is possible that the sample is not of terrestrial origin, but instead crystallized on the Moon, however, that would require conditions never before inferred from lunar samples. It would require the sample to have formed at tremendous depths, in the lunar mantle, where very different rock compositions are anticipated. Therefore, the simplest interpretation is that the sample came from Earth.

The team’s analyses are providing additional details about the sample’s history. The rock crystallized about 20 kilometers beneath Earth’s surface 4.0-4.1 billion years ago. It was then excavated by one or more large impact events and launched into cis-lunar space. Previous work by the team showed that impacting asteroids at that time were producing craters thousands of kilometers in diameter on Earth, sufficiently large to bring material from those depths to the surface. Once the sample reached the lunar surface, it was affected by several other impact events, one of which partially melted it 3.9 billion years ago, and which probably buried it beneath the surface. The sample is therefore a relic of an intense period of bombardment that shaped the Solar System during the first billion years. After that period, the Moon was affected by smaller and less frequent impact events. The final impact event to affect this sample occurred about 26 million years ago, when an impacting asteroid hit the Moon, producing the small 340 meter-diameter Cone Crater, and excavating the sample back onto the lunar surface where astronauts collected it almost exactly 48 years ago (January 31–February 6, 1971).

The scientists also admit that their conclusion is controversial and will be disputed. If true, however, it suggests that there is significant material on the Moon from the early Earth that can provide a window into parts our planet’s history that are presently inaccessible.