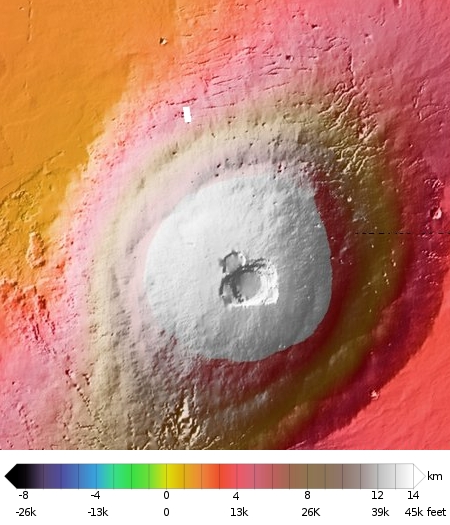 Today’s cool Mars’ image started out when I came across an interesting image of a depression on the northern flank of the giant Martian volcano Ascraeus Mons, the northernmost of the line of three giant volcanoes just to the east of the biggest of all, Olympus Mons.

To provide context I created an overview showing the entire volcano (with the white rectangle showing the location of the depression image), and suddenly realized that this overview might actually be more interesting to my readers. To the right is that overview of Ascreaus, with a scale across the bottom to indicate the elevation of the mountain above what scientists have determined to be Mars’ pseudo sea level.

Notice that this volcano, the second highest on Mars, rises more than 43,000 feet above the surrounding plains. Its peak is estimated to be about 59,000 feet high, making it taller than Mt. Everest by about 30,000 feet (more than twice its height). Its diameter is approximately 300 miles across, giving it a much steeper profile than the higher but more spread out Olympus Mons. The map below shows this mountain in relation to Olympus as well as its nearby partner volcanoes.
END_OF_DOCUMENT_TOKEN_TO_BE_REPLACED

The steep slumping wall of a Martian volcano caldera
October 30, 2018 10:19 am Robert Zimmerman 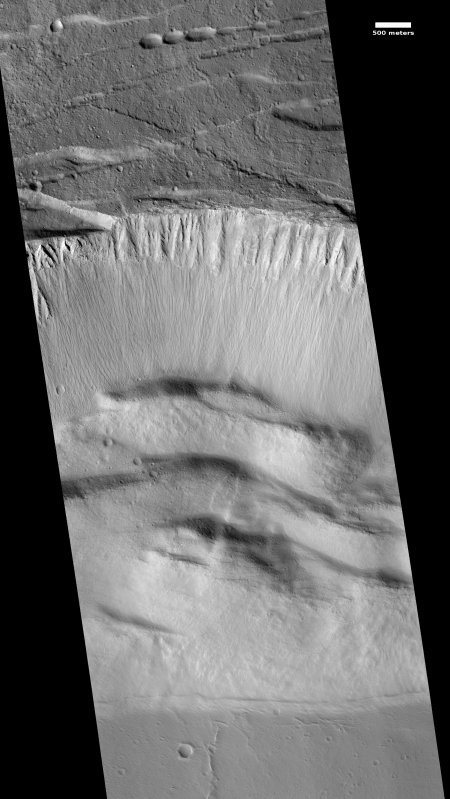 Cool image time. The Mars Reconnaissance Orbiter science team today released a nice captioned image of the steep wall of the caldera of Ascraeus Mons, the northernmost of the three giant volcanoes that lie to the east of Olympus Mons, the biggest volcano of all. The image on the right, reduced and cropped, shows that steep wall, with full image available by clicking on it. The caption from the release focuses on the fluted upper parts of the wall.

We can see chutes carved into the soft dust that has built up on the slope, with some similarities to gully landforms elsewhere on the planet.

More revealing to me is how this image reveals the slumping that is slowing eroding the caldera’s walls while also making that caldera larger. First, the plateau above the cliff shows multiple small cliffs and pit chains, all more or less parallel to the wall. This suggests that the plateau is over time breaking apart and falling into that caldera. Think of it as an avalanche in slow motion, with the upper plateau separating into chunks as sections slowly tilt down toward eventual collapse. As these chunks separate, they cause cracks to form in that plateau, and hence the parallel cliffs and strings of pits.

On the floor of the caldera we can see evidence of past chunks that did fall, piled up in a series terraces at the base of the wall. These are covered with the soft dust that dominates Martian geology. That soft dust also apparently comprises much of the wall’s materials, and almost acts like a liquid as it periodically flows down the wall, producing the chutes at the top of the wall.

The weak Martian gravity here is an important factor that we on Earth have difficulty understanding. It allows for a much steeper terrain, that also allows structurally weaker materials to hold together that would be impossible on Earth.This image gives a taste of this alien geology, on a large scale.