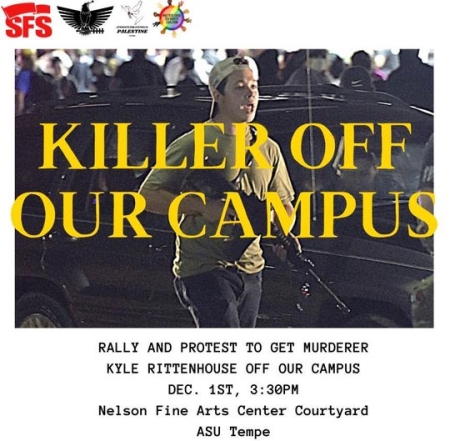 The contempt leftist students at ASU have for the law

It appears being found innocent of a crime no longer is sufficient for the jack-booted storm-troopers on the student left. Heavy protests at Arizona State University against Kyle Rittenhouse‘s attendance at the university as an online student has now apparently forced him out of ASU, at least temporarily.

Students groups like MEChA (Movimiento Estudiantil Chicanx de Aztlán), Students for Socialism, Students for Justice in Palestine and the Multicultural Solidarity Coalition are organizing a rally this week to “get murderer Kyle Rittenhouse off [the] campus.” He is not on campus since he is enrolled as an online student. (Indeed, some reports indicate that he may not be currently enrolled for any classes at ASU). However, Rittenhouse has expressed interest in in-person attendance at ASU. Students and faculty are being called to the rally to “protect students from a violent, blood-thirsty murderer.”

How tolerant of them. As far as these brownshirts are concerned, Rittenhouse will always be guilty, no matter what, and should fry in hell. Or at least, he should be sent to a concentration camp where these leftists believe all their opponents should be sent. Gas chambers next if possible.

When this anti-Rittenhouse demonstration did occur on December 1st, it suddenly found itself overwhelmed by conservatives chanting “Let’s Go Brandon!” and “Self-Defense!” The videos at this link are fun to watch, as the leftists keep advocating positions of hate and bigotry (“All whites are bigots”) while the protesters stand for self-defense, freedom, and fair play. And there do appear to be as many pro-Rittenhouse protesters as anti.

Many of the conservatives crashing the leftist protest were also apparently supporters of Kari Lake, who is a former Arizona television news anchor running for governor, with Donald Trump’s endorsement.

It appears that Rittenhouse might still attend ASU, even in person. From the last link:

“Amid his most recent semester, Kyle’s professors at Arizona State University recommended a compassionate withdrawal of his online classes. Now that the trial is behind him, Kyle is eager to enroll in more classes. He is hopeful that attending Arizona State in person will soon be an option,” Hancock [Rittenhouse spokesman] said.

If he should do so, Rittenhouse should be prepared for violence against him. Arizona however is an open-carry state. He will be within his rights to walk around openly armed. I also suspect that many of the conservatives who crashed the leftist protests will be eager to stand by him in support, equally armed.