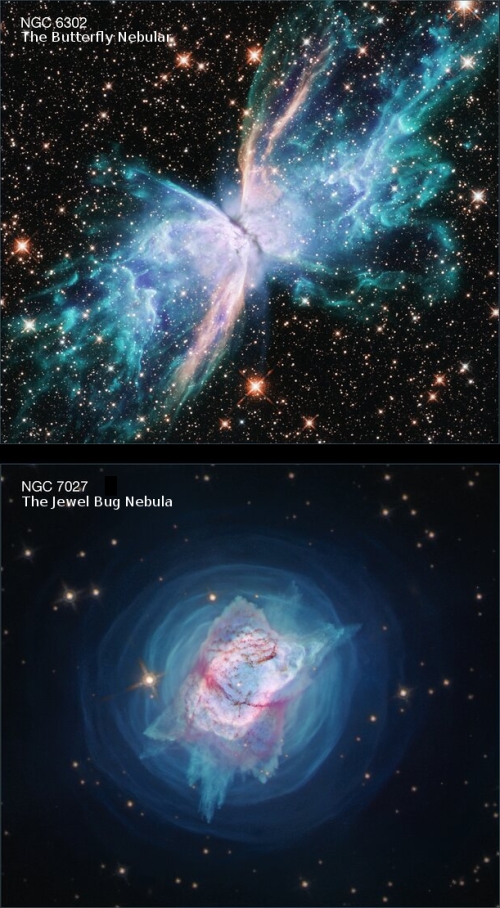 Cool images from Hubble! Astronomers have used the Hubble Space Telescope’s entire suite of instruments to produce spectacular new multi-wavelength images of two planetary nebulae, stars that for some reasons not yet entirely understood are surrounded by breath-taking jets and cloud-formations of all shapes and sizes.

The two images are to the right, cropped and reduced to post here.

Planetary nebulas, whose stars shed their layers over thousands of years, can turn into crazy whirligigs while puffing off shells and jets of hot gas. New images from the Hubble Space Telescope have helped researchers identify rapid changes in material blasting off stars at the centers of two nebulas — causing them to reconsider what is happening at their cores.

In the case of NGC 6302, dubbed the Butterfly Nebula, two S-shaped streams indicate its most recent ejections and may be the result of two stars interacting at the nebula’s core. In NGC 7027, a new cloverleaf pattern — with bullets of material shooting out in specific directions — may also point to the interactions of two central stars. Both nebulas are splitting themselves apart on extremely short timescales, allowing researchers to measure changes in their structures over only a few decades.

This is the first time both nebulas have been studied from near-ultraviolet to near-infrared light, a complex, multi-wavelength view only possible with Hubble.

The press release suggests that the most likely and popular explanation for the formation of planetary nebula is the interaction of two closely orbiting stars. While this might be true, it remains only one theory among many, all of which explain some of what we see and none of which explain everything. As I noted in my November 2014 cover story about planetary nebulae for Sky & Telescope:
END_OF_DOCUMENT_TOKEN_TO_BE_REPLACED