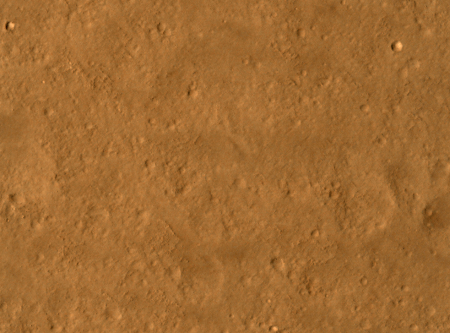 The image to the right, reduced to post here, was taken by the high resolution camera on Mars Reconnaissance Orbiter (MRO), and provides a close-up of the relative smooth terrain found in the region on Mars that the Chinese have said is one of their prime landing sites for their 2020 Mars rover and lander. According to planetary scientist Alfred McEwen of the Lunar & Planetary Laboratory in Arizona,

There was a presentation at the European planetary & science conference in Geneva last fall, and a Chinese scientist gave an update on their plans and showed this area with the lat-long coordinates. That’s what I’m going on.

McEwen also admits that “there might have been a change since then. I’m not in the loop.” No one outside China really is, as that government remains quite opaque on these matters. They will likely only reveal their final landing site choice as we get closer to launch. 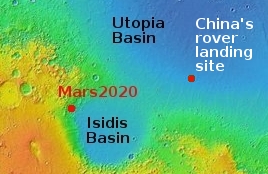 This location, on the northern lowlands plains of Utopia Planitia, makes great sense however for a first attempt by anyone to soft land on Mars. In fact, in 1976 these plains were the same location that NASA chose for Viking 2, for the same reasons. (The Viking 2 landing site was to the northeast of the Chinese site, just beyond the right edge of the overview map) While there are plenty of craters and rough features, compared to most of Mars’s surface, Utopia could be considered as smooth as a bowling ball.

Even so, a look at the full image shows that there are numerous features nearby that would be a threat for any robotic lander. McEwen notes,
END_OF_DOCUMENT_TOKEN_TO_BE_REPLACED