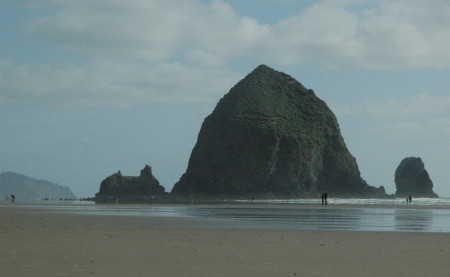 Posting has been somewhat mixed this week because Diane and I are out in Oregon at a beach-side hotel in Cannon Beach. We and my oldest friend Lloyd and his family are here to visit and see some sites.

On the right is a picture of the beach and Haystack Rock, which rises more than 230 feet above the sea. We did two hikes to its base, one when the tide was out and you could get very close and see the aquatic life in the tidal pools. Quite beautiful.

This location is where Lewis & Clark first saw the Pacific during their expedition. The local museum, the Cannon Beach History Center & Museum, was fascinating. For one thing I had not known that the town was named after an actual ship cannon from the shipwreck of the American Navy ship the Shark, which foundered here in 1846. The crew was all saved, but the ship and its military equipment were lost.

In October 1846, Lieutenant Howison received information through the Tillamook people that part of the ship’s hull “with guns upon it,” had come ashore south of Tillamook Head. The lieutenant sent Midshipman Simes to visit the location. Simes reported finding the wreckage and succeeded in “getting one cannon above the high-water mark,” while two others were left buried.

Then in December 1863, mail carrier John Hobson reported seeing a cannon at present-day Arch Cape Creek. Soon after, this cannon became lost when tides buried it in sand. In June 1898, however, it was spotted once again-this time by mail carrier George Luce. With the help of his Nehalem neighbors John and Mary Gerritse and their team of horses, Luce succeeded in pulling the cannon out of the sand, after which time it stood in front of the Austin House Post Office in Arch Cape for several years.

Hobson by the way spent the last thirty years of his life, from 1864 to 1894, searching in vain for the cannon. It was only found four years after his death.

The cannon is now in the museum. In addition, the other two cannons were finally found in 2008.