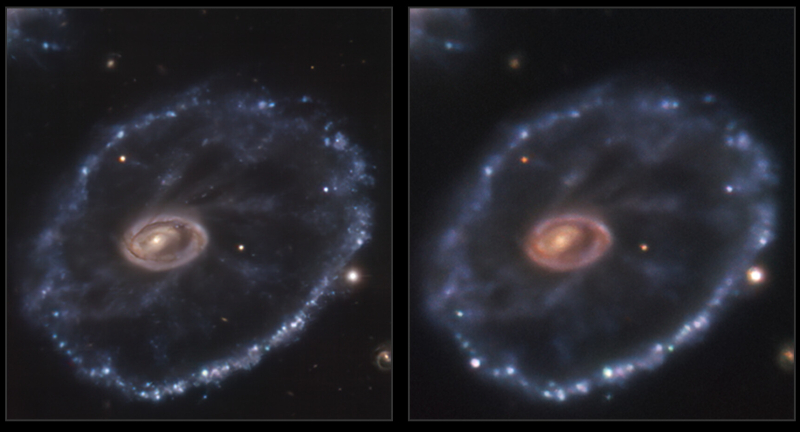 Cool image time! In reviewing a December 2021 image of the Cartwheel Galaxy taken by the New Technology Telescope in Chile, astronomers noticed something that was not there in earlier images, a new supernovae.

The photo above, reduced to post here, compares a 2014 image, taken by the Very Large Telescope, with the 2021 photo. In the lower left of the new image is a bright object not in the previous photo.

This event, called SN2021afdx, is a type II supernova, which occurs when a massive star reaches the end of its evolution. Supernovae can cause a star to shine brighter than its entire host galaxy and can be visible to observers for months, or even years — a blink of an eye on astronomical timescales. Supernovae are one of the reasons astronomers say we are all made of stardust: they sprinkle the surrounding space with heavy elements forged by the progenitor star, which may end up being part of later generations of stars, the planets around them and life that may exist in those planets.

Cartwheel is about 500 million light years away, and because of its bright outer ring is one one of the more unusual nearby galaxies.