The cliff at the end of Chasma Boreale on Mars
February 5, 2020 2:11 pm Robert Zimmerman 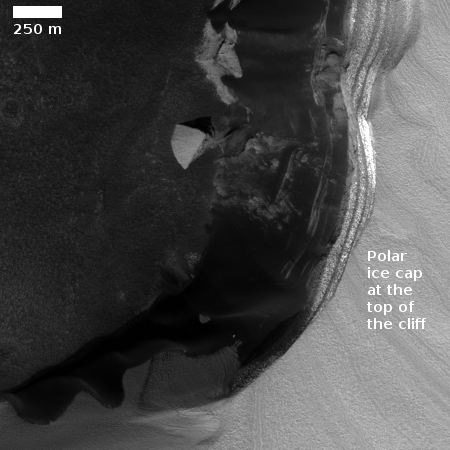 Cool image time! The image to the right, cropped to post here, was taken by the high resolution camera on Mars Reconnaissance Orbiter (MRO) on November 15, 2019 during the height of the Martian summer in the northern hemisphere. It shows the scarp of the polar ice cap, looking directly down that scarp at what the MRO image post dubs an “exposure of basal unit”, or the bottom of the cap itself. This suggests that the base of that cliff is no longer ice, but the bedrock below it. If this cliff is similar to other scarps off the polar ice cap it should be at least 1,600 feet tall. It might be more, however, as the elevation difference between the cap and the floor of this basin is estimated by scientists to be more than a mile total.

This scarp however is different than the outer icecap scarps where avalanches occur with great frequency during the spring and summer. Instead, it is located in the heart of the ice cap, at the very end of the gigantic canyon Chasma Boreale that slashes a deep cut into that ice cap, practically cutting it in half. 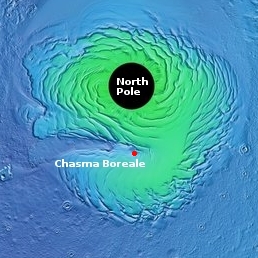 The overview map on the right, with the red dot showing where this image is located, illustrates the cutting nature of Chasma Boreale. The canyon itself is 350 miles long with a width of about 75 miles at its beginning and with walls that at some points rising a mile in height.

Scientists theorize this canyon was formed by melting ice from cap that built up at the cap’s base, causing erosion and collapse, with the flow following the grade down hill from this end point out to the lowland plains beyond. It is also possible winds played a part in this process, encouraging the canyon formation.