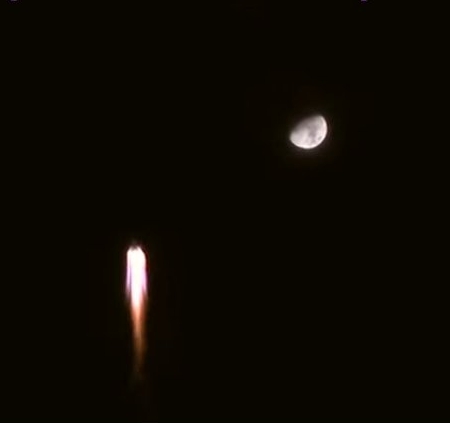 The image to the right is a screen capture from the live stream, mere seconds after launch.

It appeared to me that the rocket’s first stage might have had grid fins to control its reentry, but I am not certain. Either way both it and the four strap-on boosters will crash in China.

The Shenzhou capsule will dock with the station in a few hours.

Watch launch of next crew to Chinese space station
October 15, 2021 9:00 am Robert Zimmerman

I have embedded the live stream of today’s launch of three astronauts to China’s space station, presently being assembled in orbit. This crew’s mission is planned for six months. More details here. From China’s state-run press is this description of the planned tasks during the mission, including two or three spacewalks as well as the addition of two more large modules to the station.

The new colonial movement: In preparation for the arrival of its next three-person crew, China yesterday successfully used its Long March 7 rocket to launch an unmanned Tianzhou freighter to its new space station, docking there seven hours later.

The Long March 7 is a new rocket that launches from China’s Wenchang spaceport on the country’s southern coast. Thus, its expendable stages fall into the ocean, not within China. The rocket also does not use toxic hypergolic fuels, but kerosene and oxygen, so it is less environmental harmful.

The crew will launch to the station on October 13th and will likely spend six months at the station.

The U.S. still leads China 34 to 32 in the national rankings.

On May 29th China successfully launched the first Tianzhou cargo freighter to bring cargo the now-orbiting first module, Tianhe, of its under construction space station, docking there one day later.

They plan to launch the first crew of three to the station in June.
The leaders in the 2021 launch race:

The U.S still leads China 22 to 14 in the national rankings.

Sorry for the late posting, but I have been off on a cave expedition in a very remote area in Nevada. Needed a break from the news and work. Presently on the long drive home. Posting will resume at full speed later tonight.

For the second time in two days China has scrubbed the launch of the first unmanned Tianzhou cargo freighter to the core module of its space station,

As before, the Chinese only said that the scrub was due to unstated “technical issues.”

They will likely try again tomorrow, but that is pure speculation. Without a more detailed report from China, we really have no idea what is happening.

China rolls out rocket for next space station launch
May 18, 2021 10:00 am Robert Zimmerman

The new colonial movement: On May 15th China rolled out the Long March 7 rocket that on May 20th will carry the first Tianzhou cargo freighter to the already launched core module of its space station.

Tianzhou-2 will carry 4.69 tons of cargo in a pressurized segment and 1.95 tons of propellant, according to the China Manned Space Agency (CMSA).

Meanwhile, the core stage, dubbed Tianhe, has successfully completed its on-orbit checkouts and has placed itself in the right orbit for the arrival of Tianzhou.

If all goes right with this cargo mission, China is targeting a June launch for the station’s first three-man crew, who will attempt to stay at the station for three months.

Do not expect much information to be released by China during these missions. Like the Soviet Union of old, and as they have been doing routinely since their space program began to gear up in the past decade, they will only make periodic terse announcements, all of which will contain only the most superficial of information. Only much later will more be learned, usually many years after the fact when its news value has vanished and it only concerns historians and space buffs.

China in turn successfully used its Long March 5B rocket to place in orbit the core module, dubbed Tianhe, of its planned space station. This is the first of eleven launches in the next two years to assemble the station’s initial configuration, including cargo and manned missions along the way.

The SpaceX live stream is at the link. I have embedded China’s English language live stream of the Tianhe launch below the fold. The launch is about 52 minutes in.

The U.S. still leads China 17 to 10 in the national rankings.
END_OF_DOCUMENT_TOKEN_TO_BE_REPLACED 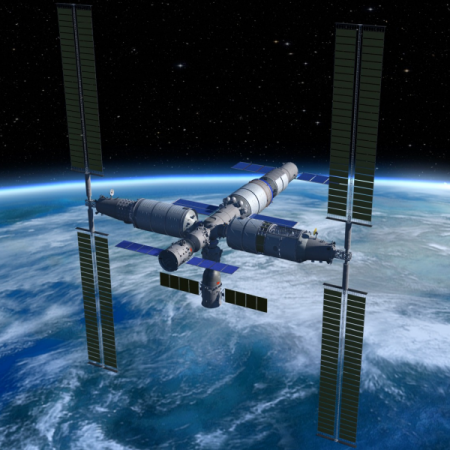 The new colonial movement: Later this month, on April 29th, China will use its Long March 5B rocket to launch the first module of its space station, dubbed Tianhe, thus beginning the assembly over the next year or so of their first space station, with ten more launches planned in that short time span.

The T-shape, 100-metric-ton CSS [Chinese Space Station] will comprise three major modules: the 18-meter-long core module, called Tianhe (“Harmony of the Heavens”), and two 14.4-meter-long experiment modules, called Wentian (“Quest for the Heavens”) and Mengtian (“Dreaming of the Heavens”), which will be permanently attached to either side of the core. As the station’s management and control center, Tianhe can accommodate three astronauts for stays of up to six months. Visiting astronauts and cargo spaceships will hook up to the core module from opposite ends. Both it and Wentian are equipped with robotic arms on the outside, and Mengtian has an airlock for the maintenance and repair of experiments mounted on the exterior of the station. Tianhe has a total of five docking ports, which means an extra module can be added for future expansion. The station is designed to operate for more than 10 years.

Much of the work on this station will be similar to the scientific research done on ISS. One additional science project linked to the station however is far more impressive:
END_OF_DOCUMENT_TOKEN_TO_BE_REPLACED