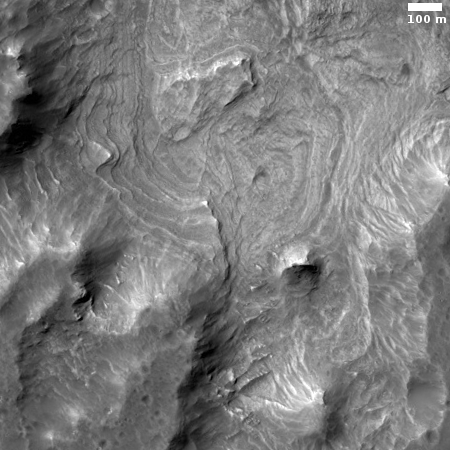 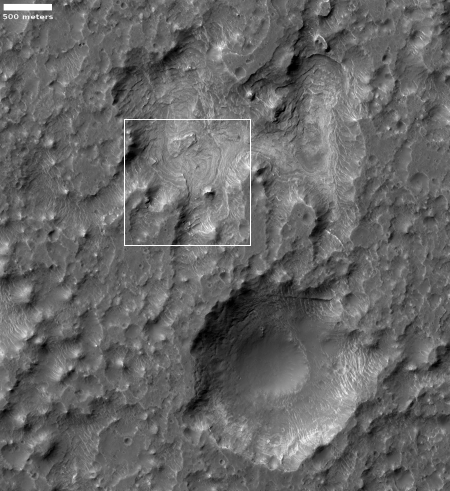 Cool image time! The southern highlands of Mars is littered with numerous craters, making it look from a distance not unlike the Moon. A closer inspection of each crater and feature, however has consistently revealed a much more complex history than seen on the Moon, with the origins of many features often difficult to explain.

The two images on the right, rotated, cropped, and reduced to post here, shows one such feature in the floor of one southern highlands crater, dubbed Columbus Crater. The top image is a close-up of the area shown by the box in the bottom image.

The uncaptioned full photograph was taken on May 20, 2019 by the high resolution camera on Mars Reconnaissance Orbiter (MRO) and was simply titled “Depression in Columbus Crater.” Since the photo included two large depressions, as shown in the wider view in the bottom image, I’m not sure which depression this title refers. In both cases the features do not appear to be impact craters. The top depression is far too irregular, while both do not have the upraised rims that are found on most impact craters.

I have zoomed into the top depression because of its many swirls and layers. On Earth such terrain is usually caused by either water or wind erosion, slowly carving a smooth path across multiple geological layers. Here, there is no obvious evidence of any flows in any direction. Something ate out the material in this depression, exposing the many layers, but what is not clear.

The lower depression reminds me of sinkholes on Earth, where the ground is subsiding into a void below ground The same process could have also formed the top depression.

The surrounding terrain is equally baffling, resembling the eroded surface of an ice block that has been sprayed with warm water. In fact, the entire floor of Columbus Crater appears to have intrigued planetary scientists, as they have requested a lot of images of it from MRO. So far they do not have enough of these images to produce a full map. Since the terrain appears to change drastically over short distances, it is therefore hard to fit the geology of each image together. The overall context is missing.

When I first saw this image I tried to reach the scientist who requested it in the hope he might provide me a more nuanced explanation of what we see here, but despite repeated requests he never responded. Therefore let me propose one theory, based on my limited knowledge of Martian geology.
END_OF_DOCUMENT_TOKEN_TO_BE_REPLACED