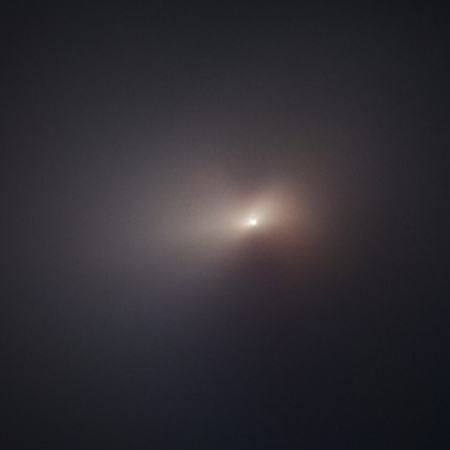 Using the Hubble Space Telescope, astronomers have obtained close-up images of Comet NEOWISE after it had survived its closest approach to the Sun. The photo to the right, cropped and reduced to post here, is one of Hubble’s two images.

Comets often break apart due to thermal and gravitational stresses at such close encounters, but Hubble’s view suggests that NEOWISE’s solid nucleus stayed intact. This heart of the comet is too small to be seen directly by Hubble. The ball of ice may be no more than 4.8 kilometres across. But the Hubble image does captures a portion of the vast cloud of gas and dust enveloping the nucleus, which measures about 18 000 kilometres across in this image.

Hubble’s observation also resolves a pair of jets from the nucleus shooting out in opposite directions. They emerge from the comet’s core as cones of dust and gas, and then are curved into broader fan-like structures by the rotation of the nucleus. Jets are the result of ice sublimating beneath the surface with the resulting dust/gas being squeezed out at high velocity.

Below the fold is a six-second movie made of Hubble’s two images, showing how the jets changed over a three hour time period on August 8th.
END_OF_DOCUMENT_TOKEN_TO_BE_REPLACED

Comet Neowise is now visible each evening just after sunset. This article shows a bunch of images produced by people worldwide.

The comet will not be back for thousands of years, so this will be your only chance to see it. And usually good evening-view comets occur only once every few decades, usually not more than once or thrice every century. If you want to see a comet in all its glory, Comet Neowise is giving you a chance, and now is the time to look.

After two other comets this spring suggested they might become bright naked eye objects and then fizzled, it now appears that Comet NEOWISE will deliver, having survived its closest approach to the Sun to now brighten towards first magnitude.

For the northern hemisphere, this is what to expect if you wish to see it:

In the morning sky, the first views of NEOWISE could come as early as July 5 or 6 in the morning sky, very low above the northeast horizon. By around July 11, the comet will reach an altitude of nearly 10 degrees — for comparison, 10 degrees is roughly equal to the width of your fist held at arm’s length. Then over the next 10 days it will gradually slide back down toward the north-northeast horizon, eventually disappearing from dawn visibility.

A far-better viewing perspective will become available in the evening sky starting around July 12, when it will appear low in the northwest sky. In the evenings to follow, the comet will rapidly climb higher in the sky.

On July 22, NEOWISE will make its closest approach to the Earth, a distance of 64 million miles (103 million km). By July 25, the comet will appear 30 degrees (“three fists”) up from the west-northwest horizon as darkness falls. And on July 30-31st, the comet will be passing just to the north of the fine star cluster of Coma Berenices or Berenice’s Hair.

Will this comet brighten more to become comparable to glorious Comet Hale-Bopp in 1997? Keep your fingers crossed.