The conjunction of Jupiter and Saturn, as seen from the Moon
December 22, 2020 9:21 am Robert Zimmerman 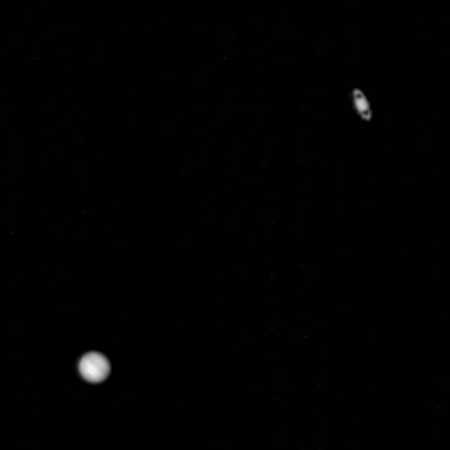 With Jupiter and Saturn closer to each other in the sky than they have been in about 800 years, the science team for Lunar Reconnaissance Orbiter (LRO) decided to aim that lunar orbiter at the two gas giants to get a picture.

The photo to the right, cropped and expanded to post here, was also enhanced by the science team to brighten Saturn so that it would match Jupiter. As they note at the link,

[LRO] captured this view just a few hours after the point of closest separation (0.1°) between the two giant planets. With the sharp focus of the NAC [camera], you can see that the two planets are actually separated by about 10 Jupiter diameters

Both planets however look fuzzy in the image, probably because the camera was not designed to obtain sharp images from this distance. Nonetheless, this is a very cool photo.