The plan for clearing Perseverance’s sample carousel of debris
January 15, 2022 9:22 am Robert Zimmerman 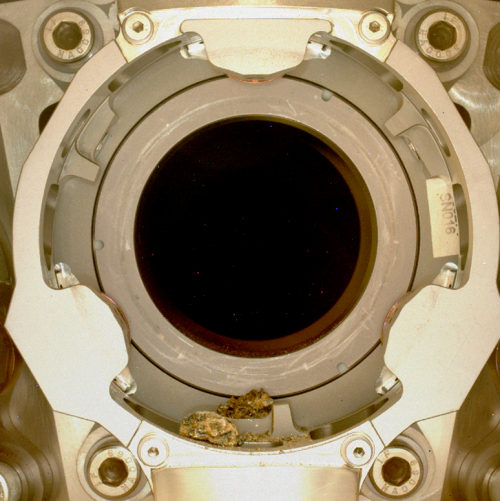 The Perseverance science team yesterday outlined the first steps in their plan to remove pieces of debris that had fallen into the core sample bit storage carousel, as shown by the picture to the right, and thus prevents them from storing further core samples.

First they have taken pictures of an area of the ground below the rover to establish a baseline. Then,

With this below-chassis, preliminary imaging, in hand, the team [will return] the remaining contents of Sample Tube 261 (our latest cored-rock sample) back to its planet of origin. Although this scenario was never designed or planned for prior to launch, it turns out dumping a core from an open tube is a fairly straightforward process (at least during Earth testing). We sent commands up yesterday, and later on today the rover’s robotic arm will simply point the open end of the sample tube toward the surface of Mars and let gravity do the rest.

This maneuver will tell them exactly how much material broke off the core when some pieces of it dropped into the carousel.

Next, on January 18th, they will have the bit carousel perform two short rotations, the first short and the second longer, to shift the debris in the carousel and get more information about it. Some might drop out with this maneuver, so they are also going to take more ground pictures to see if any did.

They have not yet outlined the next steps in this removal procedure, though they have said the need for this procedure was anticipated when the rover was designed. Thus they must know what those steps will be, but are likely holding off outlining them because they might need to revise their actions depending on what they learn in the next few days.