Today’s blacklisted American: Professor defends free speech, is canceled by MIT and attacked by students, yet fights back and wins
November 18, 2021 11:48 am Robert Zimmerman 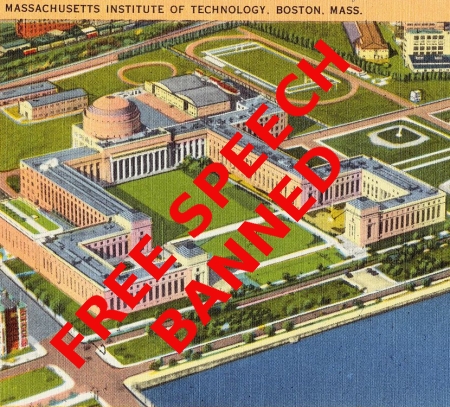 No free speech allowed at MIT.

Today’s blacklist story illustrates how it is possible to win the battle against the petty leftist tyrants who now dominate our culture and are trying to silence free speech and destroy anyone who disagrees with them.

Dorian Abbot is an associate professor of planetary geology at the University of Chicago. Beginning in 2020 he began as a side activity posting videos advocating free speech in academia while condemning the growing oppressive movement to blackball anyone who says the “wrong” thing.

For the next year he found himself under increasing pressure from the leftist mob both at his school and outside it. His videos were taken down repeatedly by Google’s YouTube. A group of graduate students from his school wrote a letter denouncing him and demanding the school exempt all students from attending his classes while limiting his abilities to teach to a point where it was impossible. Later, in response to an op-ed Abbot co-wrote for Newsweek condemning the race-based identify politics that now dominate academia, a leftist Twitter mob came after him, demanding he be removed from all venues.

Fortunately, his superiors at the University of Chicago supported him, and refused to bow to these repressive demands. However, when Abbot was scheduled to give a lecture at MIT on his actual field of study, planetary science, “a new Twitter mob, composed of a group of MIT students, postdocs, and recent alumni, demanded that Abbot to be uninvited.”

MIT bowed to the pressure, and blackballed Abbot.
END_OF_DOCUMENT_TOKEN_TO_BE_REPLACED