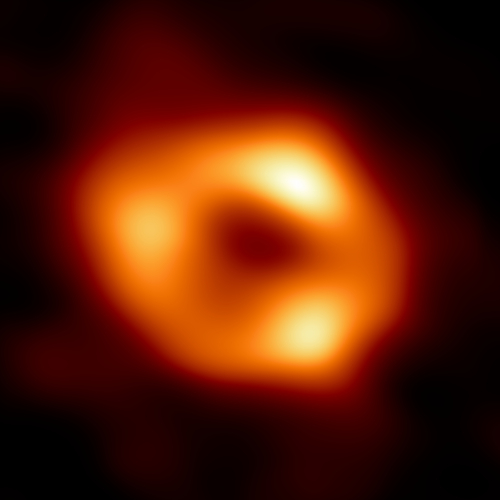 Using an array of eight radio telescopes worldwide, dubbed the Event Horizon Telescope because its purpose is to study black holes, scientists have obtained the first radio image of the event horizon of Sagittarius A* (pronounced “A-star”), the supermassive black hole at the center of the Milky Way.

The image to the right, reduced to post here, is that photo.

The image is a long-anticipated look at the massive object that sits at the very centre of our galaxy. Scientists had previously seen stars orbiting around something invisible, compact, and very massive at the centre of the Milky Way. This strongly suggested that this object — known as Sagittarius A* (Sgr A*, pronounced “sadge-ay-star”) — is a black hole, and today’s image provides the first direct visual evidence of it.

Although we cannot see the black hole itself, because it is completely dark, glowing gas around it reveals a telltale signature: a dark central region (called a “shadow”) surrounded by a bright ring-like structure. The new view captures light bent by the powerful gravity of the black hole, which is four million times more massive than our Sun.

This is the second supermassive black hole that the Event Horizon array has imaged. In 2019 it captured the central black hole of the galaxy M87, 55 million light years away. Like that first image, much of what we see here is created by computer, since the data from the eight radio telescopes needs to be massaged to create something as smooth and as complete as this.