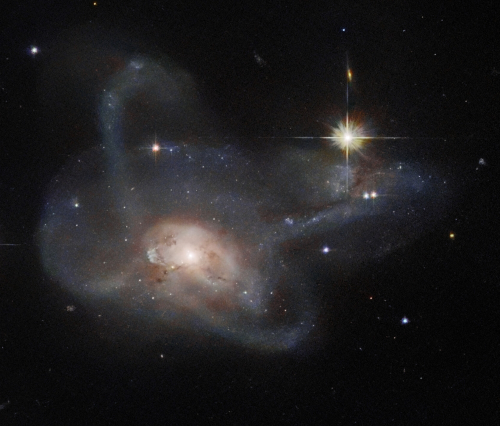 Cool image time! The picture to the right, cropped and reduced to post here, was released yesterday by the science team that operates the Hubble Space Telescope. It captures a galaxy about 520 million light years away that appears to have been reshaped due to a galaxy merger.

That merger somehow distorted the disk of the inner galaxy, the brightest area, while also producing two sweeping spiral streams in the surrounding periphery.

Despite its unusual shape, astronomers did not choose to study this galaxy. From the caption:

This observation is a gem from the Galaxy Zoo project, a citizen science project involving hundreds of thousands of volunteers from around the world who classified galaxies to help scientists solve a problem of astronomical proportions: how to sort through the vast amounts of data generated by telescopes. A public vote selected the most astronomically intriguing objects for follow-up observations with Hubble. CGCG 396-2 is one such object, imaged here by Hubble’s Advanced Camera for Surveys. 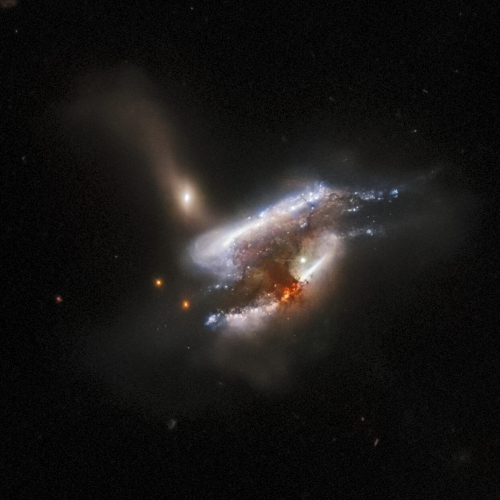 Cool image time! The Hubble Space Telescope science team today released the photo to the right, cropped and reduced to post here, of the interaction of three galaxies, the larger two of which look like they are hugging each other.

This galaxy triplet is estimated to be about just under 700 million light years away. It was taken as part of a program aimed at producing high quality images of strange looking galaxies.

Using Hubble’s powerful Advanced Camera for Surveys, astronomers took a closer look at some of the more unusual galaxies that volunteers identified. The original Galaxy Zoo project was the largest galaxy census ever carried out and relied on crowdsourcing time from more than 100,000 volunteers to classify 900,000 unexamined galaxies. The project achieved what would have been years of work for a professional astronomer in only 175 days and has led to a steady stream of similar astronomical citizen science projects. Later Galaxy Zoo projects have included the largest ever studies of galaxy mergers and tidal dwarf galaxies, as well as the discovery of entirely new types of compact star-forming galaxies.

If you want to do some real science, you should definitely check out the Galaxy Zoo webpage. Anyone can join in, using images produced by the Victor Blanco 156 inch (4 meter) telescope in Chile to find cool stuff that needs closer examination using better telescopes like Hubble.