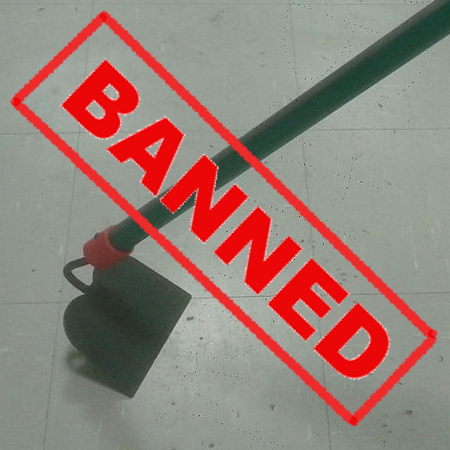 According to Facebook, a garden hoe apparently represents evil
and the worst of white supremacy.

Today’s blacklisted American, garden hoes, is meant more to illustrate the utter brainlessness of the blacklist culture, and why every intelligent American should refuse to bow to it in any way.

It appears that Facebook has been repeatedly flagging and then blocking posts on a gardening group because those gardeners periodically make reference to the gardening tool called a “hoe.”

A group called WNY Gardeners has been repeatedly flagged by the social network for “violating community standards,” when its more than 7,500 members discussed the long-handled bladed implement, which is spelled with an “e,” unlike the offensive term.

When one member commented “Push pull hoe!” on a post about preferred weeding tools, Facebook sent a notification that read, “We reviewed this comment and found it goes against our standards for harassment and bullying,” a moderator said.

“And so I contacted Facebook, which was useless. How do you do that?,” Elizabeth Licata said. “You know, I said this is a gardening group, a hoe is gardening tool.”

Nor has this been Facebook’s only “hoe” error. It had also been routinely flagging posts that referred to the English seaside community of Plymouth Hoe.

Facebook of course never responded to gardening group when they complained, as is usual for these inhumane big tech companies. However, when this story began appearing in the press, it told the AP that it was sorry about it, had corrected the algorithms that had caused the problems, and had assigned a real human to monitor the gardening group to make sure it is not censored for ordinary gardening discussions.

Hah! That didn’t work. The gardeners soon found themselves censored for writing about the various techniques they use for battling the Japanese beetle, a destructive pest to “flowers, trees and shrubs, fruits and vegetables, field crops and turf.” When on commenter suggested that gardeners should “Kill them all. Drown them in soapy water,” and “Japanese beetles are jerks,” the posts were blocked by Facebook.

It seems Facebook employees really don’t know how to read. Instead, they work eagerly to silence anyone for any statement they think should be silenced, without thought.

Throwing away the Kerwood Derby

All this reminds me of the short clip below from the early 1960s cartoon show, Rocky & Bullwinkle.
END_OF_DOCUMENT_TOKEN_TO_BE_REPLACED

An evening pause: This battle between an inventive physicist and an even more determined squirrel does raise the question, who really is smarter?