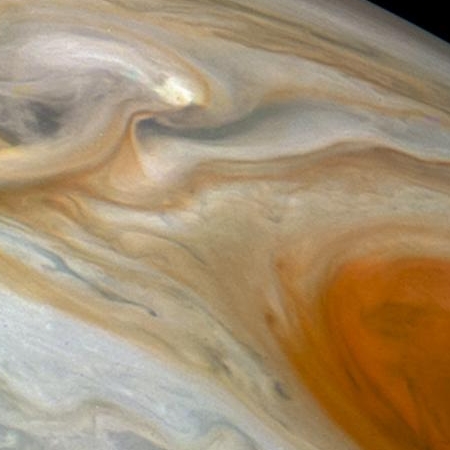 During its most recent close approach of Jupiter, Juno took the above image of the gas giant’s Great Red Spot from a distance of 26,697 miles above the cloud tops. As noted at the link,

This view highlights the contrast between the colorful South Equatorial Belt and the mostly white Southern Tropical Zone, a latitude that also features Jupiter’s most famous phenomenon, the persistent, anticyclonic storm known as the Great Red Spot.

Just for fun, I cropped out at full resolution the bright storm just to the west of the Great Red Spot, as shown on the right.

It is important to understand the vastness of this image’s scale. You could almost fit two full Earths within the Great Spot. The close-up covers only a slightly smaller range of size. Thus, that tiny bright storm would be the largest hurricane ever seen on Earth, able to cover almost the entire Pacific Ocean. By timing things perfectly, scientists have used the Hubble Space Telescope to take a very cool image of Jupiter, with the shadow of its largest moon Ganymede cast into the planet’s Giant Red Spot.

The science from this image is somewhat limited, but damn, it sure is a neat demonstration of our modern ability to do amazing things with technology.