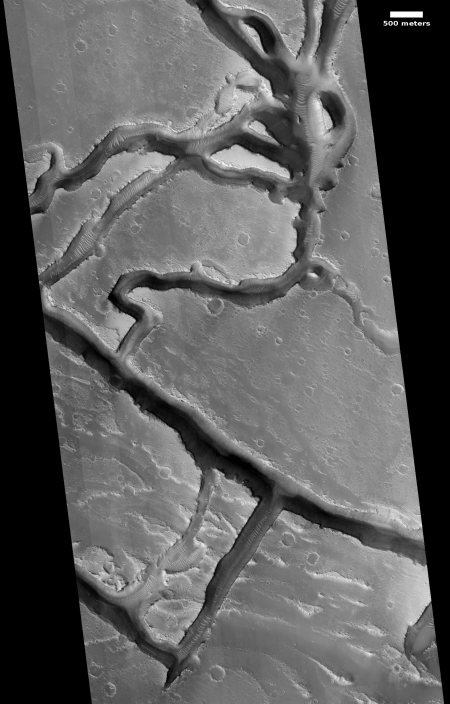 Cool image time! The photo on the right, cropped and reduced to post here, was part of the November image release from the high resolution camera on Mars Reconnaissance Orbiter (MRO). If you click on the image you can see the full resolution picture.

The uncaptioned release webpage is dubbed “Faults in Granicus Valles.” The image itself only shows a small part of Granicus Valles, named after a river in Turkey, that flows down from the estern slopes of the giant volcano Elysium Mons. While far smaller than the four big Martian volcanoes in the Tharsis region to the east and near Marines Valles (which I highlight often), Elysium Mons still outshines anything on Earth at a height of almost 30,000 feet and a width of 150 miles. It sits at about the same northern latitude of Olympus Mons, but all by itself, rising up at the very northern edge of the transition zone between the southern highlands and the northern plains, with the vast Utopia Basin, the second deepest basin on Mars, to the west. 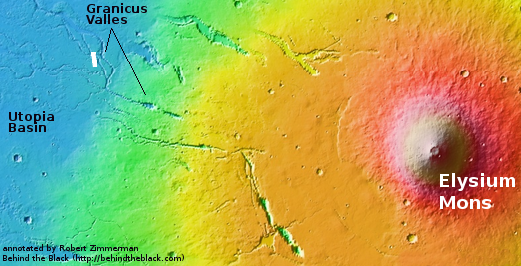 Granicus Valles itself is almost five hundred miles long. At its beginning it flows in a single straight fault, but once it enters the northern plains of Utopia Basin it begins to meander and break up into multiple tributaries. The MRO image above shows only a tiny portion in the northern plains, as illustrated by the white box in the overview map to the left.
END_OF_DOCUMENT_TOKEN_TO_BE_REPLACED