The cool image below needs little explanation. It shows, in all its beauty, Jupiter’s Great Red Spot, taken from a Juno image during the spacecraft’s 21st fly-by of Jupiter. Citizen scientists Navaneeth Krishnan S enhanced the image only slightly, but that slight work brought out the details quite wonderfully. Citizen scientist Björn Jónsson has compiled the montage to the right, reduced to post here, of the five times Jupiter’s Great Red Spot (GRS) was imaged by Juno during its repeated orbital fly-bys.

The mosaics show how the GRS and nearby areas have changed over the course of the Juno mission. The mosaics cover planetographic latitudes 4.7 to 38 degrees south.

Some of the changes are remarkable, considering the short time involved. For example, note the appearance of the large white storm below the Spot in the third image, taken in December 2018. It wasn’t there in April 2018, and was gone by Feburary 2019. This doesn’t mean it had dissipated. Instead, the storm is in a different band which moves at a different speed than the band that the Spot is in. It has thus simply moved away.

This movement is even more remarkable when we remember that the Great Red Spot is about the width of the Earth. 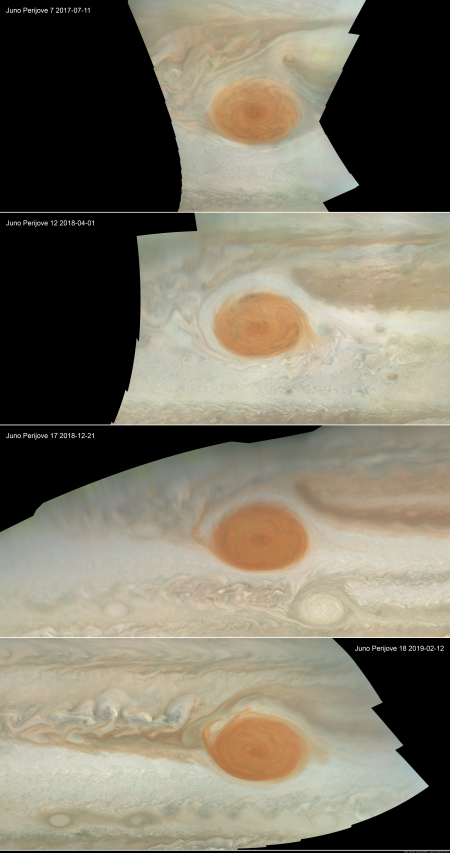 Using Juno images produced during four different orbits, beginning in July 2017 through February 2019, citizen scientist Björn Jónsson has created a montage, reduced in resolution to post on the right, that shows the changes that have occurred in Jupiter’s Great Red Spot during that time. As he writes,

This is a montage of four map-projected [Spot] mosaics processed from images obtained during these perijoves (at the time of this writing perijove 20 is the most recent perijove). The mosaics show how the [Spot] and nearby areas have changed over the course of the Juno mission. The mosaics cover planetographic latitudes 4.7 to 38 degrees south.

What strikes me the most is how the Spot itself seems relatively unchanged, while the bands and surrounding cloud formations changed significantly during this time. 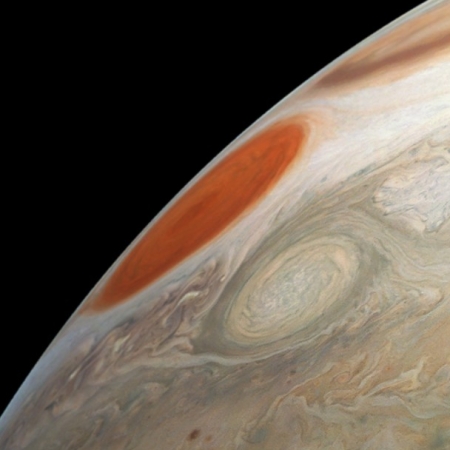 Cool image time! Citizen scientists Gerald Eichstädt and Seán Doran have released two new images that they have processed from the Juno raw image archive that were taken during the most recent spacecraft fly-by of Jupiter. The image to the right, cropped and reduced to post here, shows the Spot as the spacecraft was flying past. If you click on the image you can see their full image, processed by them to bring out the details and colors.

Even more spectacular, though unfortunately much too short, is the gif animation they have produced combining a number of images from this fly-by. I have embedded this animation below the fold. If you watch closely, you can see the rotation of this gigantic storm, including the motion of the jet streams within it.
END_OF_DOCUMENT_TOKEN_TO_BE_REPLACED

Cool movie time! In conjunction with the release yesterday of data from Juno’s first close fly-over of Jupiter’s Great Red Spot, the science team also released an animation of what it would be like to fly down into the Spot.

You can also download the mp4 file here. It is definitely worth watching. It illustrates forcefully how daunting and challenging it will be for the human race to ever explore the vastness of Jupiter. This simulated plunge only goes into the Great Red Spot a few hundred miles, and barely touches its dynamics.

The Juno science team released its results from the spacecraft’s first close fly over of Jupiter’s Great Red Spot in July 2017.

Jupiter’s Great Red Spot is a giant oval of crimson-colored clouds in Jupiter’s southern hemisphere that race counterclockwise around the oval’s perimeter with wind speeds greater than any storm on Earth. Measuring 10,000 miles (16,000 kilometers) in width as of April 3, 2017, the Great Red Spot is 1.3 times as wide as Earth.

“Juno found that the Great Red Spot’s roots go 50 to 100 times deeper than Earth’s oceans and are warmer at the base than they are at the top,” said Andy Ingersoll, professor of planetary science at Caltech and a Juno co-investigator. “Winds are associated with differences in temperature, and the warmth of the spot’s base explains the ferocious winds we see at the top of the atmosphere.”

The storm’s estimate depth, about 200 miles, seems gigantic, but then we must remember this storm is on a gas giant that is about 88k miles in diameter, about ten times larger than Earth. The relative size of this storm to the size of Jupiter therefore is really not that much different than the relative size of big hurricanes on Earth. At the same time, the realities here are daunting, filled with unknowns, chief of which is the fact that unlike Earth, the Great Red Spot is a storm that is floating high in the atmosphere with no solid surface below it.

The Juno science team has released the images taken by Juno as it flew past Jupiter’s Great Red Spot on June 11.

The three images at the link were all processed by citizen scientists, who took the raw images provided immediately and enhanced the colors. Not surprisingly, the images reveal that there are storms within storms within storms inside the Spot, which itself is a storm, the largest in the solar system.

Jupiter’s Great Red Spot, a giant storm that has been raging for at least three centuries, turns out to be the hottest spot on Jupiter.

They suspect that the spot is heated from below, but really understand much else, or even that.

Juno is specifically designed to study the weather patterns of Jupiter, so we will get some of these answers, plus a lot more questions, in the coming years as the spacecraft gathers its data.

New ground-based chemistry research suggests that the bombardment of cosmic rays in Jupiter’s upper atmosphere could be the cause of the red color of the gas giant’s Great Red Spot.

They found that one of the spot’s major components, ammonium hydrosulfide, breaks down when exposed to that radiation in such a way that it turns red. They also think that ultraviolet radiation, also prevalent in space, will do the same.

Using the Hubble Space Telescope astronomers have compiled a new set of maps of Jupiter, showing changes in the gas giant’s bands and spots, including the Giant Red Spot.

The scientists behind the new images took pictures of Jupiter using Hubble’s Wide Field Camera 3 over a ten-hour period and have produced two maps of the entire planet from the observations. These maps make it possible to determine the speeds of Jupiter’s winds, to identify different phenomena in its atmosphere and to track changes in its most famous features.

The new images confirm that the huge storm, which has raged on Jupiter’s surface for at least three hundred years, continues to shrink, but that it may not go out without a fight. The storm, known as the Great Red Spot, is seen here swirling at the centre of the image of the planet. It has been decreasing in size at a noticeably faster rate from year to year for some time. But now, the rate of shrinkage seems to be slowing again, even though the spot is still about 240 kilometres smaller than it was in 2014.

In the 1880s the GRS resembled a huge blimp gliding high above white crystalline clouds of ammonia and spanned 40,000 km (25, 000 miles) across. You couldn’t miss it even in those small brass refractors that were the standard amateur observing gear back in the day. Nearly one hundred years later in 1979, the Spot’s north-south extent has remained virtually unchanged, but it’s girth had shrunk to 25,000 km (15,535 miles) or just shy of two Earth diameters. Recent work done by expert astrophotographer Damian Peach using the WINJUPOS program to precisely measure the GRS in high resolution photos over the past 10 years indicates a continued steady shrinkage.

Lots more fascinating information at the link. Read it all.