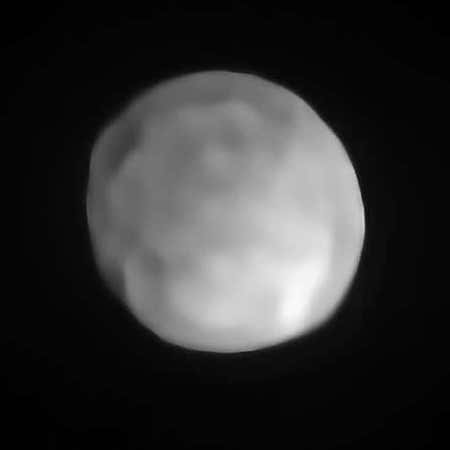 A new image of the asteroid Hygiea has revealed that this main belt object is actually spherical, making it the smallest spherical asteroid so far discovered and suggesting that it could be defined as a planet.

The image, taken by the Very Large Telescope (VLT) in Chile, is to the right. The asteroid was first discovered in 1849 and is the fourth largest in the asteroid belt, after Ceres, Pallas, and Vesta, with a diameter of 267 miles.

The image once again challenges the definition of what makes a planet. It also makes difficult the vague term “dwarf planet.” At what point does a dwarf become a full planet? This has never been clarified, which is why I tend to avoid using the term dwarf planet.

In my many interviews of planetary scientists, they generally dismiss the IAU’s poor definition of a planet and define a planet as anything that has settled into a spherical shape. In the case of Hygiea, that seems to apply.