Big sections break off of interstellar Comet 2I/Borisov
April 7, 2020 at 9:23 am Robert Zimmerman Points of Information

The uncertainty of science: New observations of the interstellar Comet 2I/Borisov as it exits our solar system indicate that large fragments have recently broken from it, and that the comet might possibly be on the verge of breaking up.

Astronomers have seen evidence of two fragments, but the data suggests these are relatively small compared to the entire comet. On the other hand,

Before perihelion, Jewitt’s analysis of Hubble images showed that Comet Borisov is much smaller than had been thought. The comet’s nucleus is not directly visible, but in the January 10th Astrophysical Journal Letters, Jewitt put its diameter between 0.4 and 1 kilometer. That’s small enough that solar vaporization of surface ices on the side facing the Sun could spin up its rotation beyond gravity’s ability to hold it together.

However, the comet’s size is tricky to estimate, as its surface appears to be emitting so much gas and dust that it obscures the nucleus. The fragment that Jewitt observed is about as bright as the comet itself, but because its surface is so icy and active, he thinks the fragment’s mass is less than 1% of the whole comet. That would make the split more like a side mirror dropping off a car than a car falling apart. Why the fragment split from the comet is unclear, but possibilities include thermal vaporization after new material was exposed, as well as the force from the comet’s spin if it’s spinning as fast as Jewitt suggests.

Whether the comet is about to break up remains unknown. Wouldn’t it be nice if someone was racing to put a mission together to visit it?

In a paper published on the Cornell arXIiv site for preprint science papers, scientists have posted a paper proposing sending an unmanned probe to the newly discovered interstellar Comet Borisov, arriving in 2045.

Their analysis found that we just missed the ideal and most efficient launch date using the Falcon Heavy. If it had launched in July 2018 a two-ton spacecraft could have reached Comet Borisov by next month.

The best alternative option is a launch in January 2030, flying past Jupiter, then the Sun, and arriving in 2045. Because of the mission’s close approach to the Sun to gain speed, the mission would require the type of shielding developed for the Parker Solar Probe. If the Space Launch System was used for launch, a six-ton spacecraft could be sent. With other available rockets the largest possible payload would be 3 kilograms (about 6 pounds), making the probe a cubesat. As they note,

Despite this very low mass, a CubeSat-scale spacecraft could be sent to the interstellar object. Existing interplanetary CubeSats (Mars Cube One) show that there is no principle obstacle against using such a small spacecraft to deep space.

In fact, having a decade and a half before launch guarantees that a cubesat will be able to do this job, because by 2030 the technology for using smallsats for this kind of planetary mission should be fully developed. 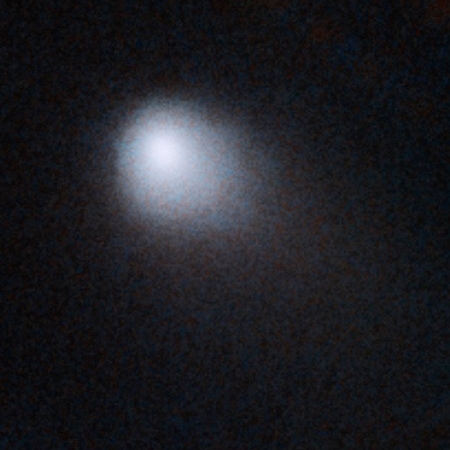