Scientists today released new images taken by the Hubble Space Telescope of the interstellar object Comet 2I/Borisov. The image on the left was taken prior to the comet’s closest approach to the Sun, while the image on the right was taken during that closest approach. The vertical smeared object to the left in the earlier image is a galaxy that happened to be in the field of view. The blue color of both images is a false color to bring out details.

“Hubble gives us the best upper limit of the size of comet Borisov’s nucleus, which is the really important part of the comet,” said David Jewitt, a UCLA professor of planetary science and astronomy, whose team has captured the best and sharpest look at this first confirmed interstellar comet. “Surprisingly, our Hubble images show that its nucleus is more than 15 times smaller than earlier investigations suggested it might be. Our Hubble images show that the radius is smaller than half-a-kilometer. Knowing the size is potentially useful for beginning to estimate how common such objects may be in the solar system and our galaxy. Borisov is the first known interstellar comet, and we would like to learn how many others there are.” 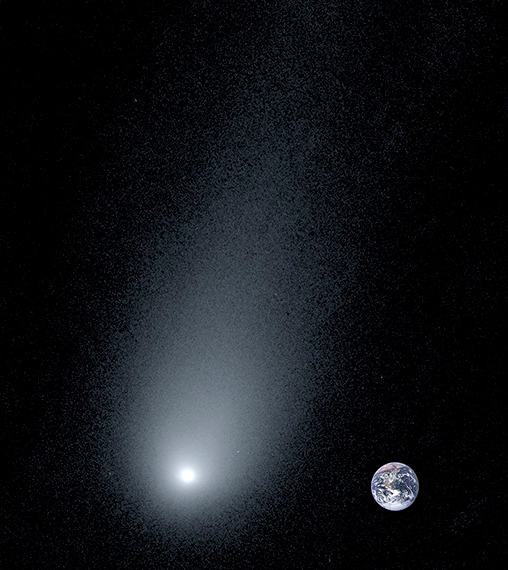 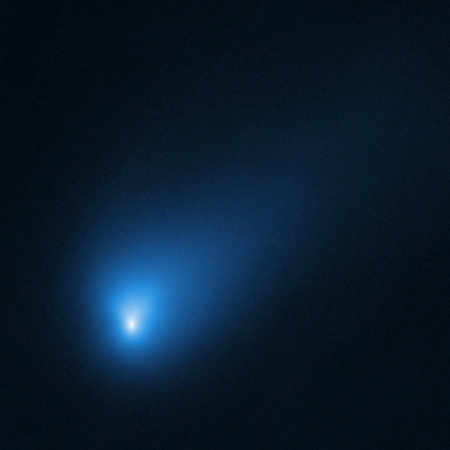 Cool image time! Using the Hubble Space Telescope astronomers have snapped the best image so far of interstellar Comet Borisov. The image to the right, reduced and cropped to post here, is that photograph.

Comet 2I/Borisov is only the second such interstellar object known to have passed through our Solar System. In 2017, the first identified interstellar visitor, an object dubbed ‘Oumuamua, swung within 38 million kilometres of the Sun before racing out of the Solar System. “Whereas ‘Oumuamua looked like a bare rock, Borisov is really active, more like a normal comet. It’s a puzzle why these two are so different,” explained David Jewitt of UCLA, leader of the Hubble team who observed the comet.

The comet was 260 million miles away when Hubble took this picture.

Comet Borisov is now 2I/Borisov
September 24, 2019 at 8:11 am Robert Zimmerman Points of Information

Because the comet that amateur astronomer Gennady Borisov discovered in August is actually the second interstellar object ever discovered that is entering the solar system, the International Astronomical Union (IAU) has decided to dub it 2I/Borisov, honoring its discoverer as is traditional with comets but indicating its interstellar nature in the name.

The orbit is now sufficiently well known, and the object is unambiguously interstellar in origin; it has received its final designation as the second interstellar object, 2I. In this case, the IAU has decided to follow the tradition of naming cometary objects after their discoverers, so the object has been named 2I/Borisov.

As my regular readers know, I am not a fan of the IAU’s effort to claim the right to name every object in the universe. In this case it has at least made the proper decision.