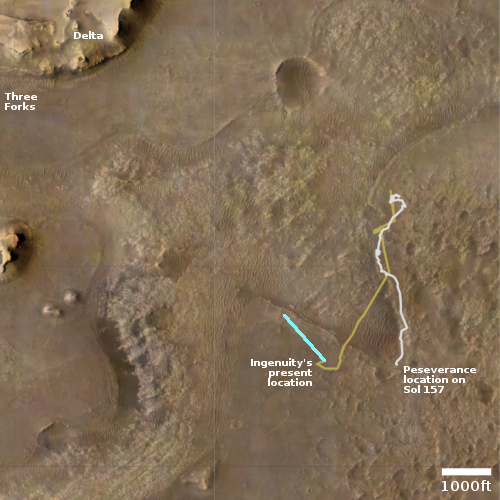 The next flight of Ingenuity on Mars is now scheduled for this evening, and will be a much simpler flight than the helicopter’s previous trip.

The map to the right shows the route in blue. The flight is mainly a transfer flight, intended to keep the copter ahead of the rover as they leapfrog from point to point in Jezero Crater. It will actually be the first flight by Ingenuity that does not push its engineering in any major way.

This map, the most up-to-date available, is at this moment about five sols out of date. Perseverance is likely slightly south and to the west of the location shown.

The present plan is for Perseverance to travel to the northwest along the dark ridgeline that Ingenuity will land next to. The rover will then retreat, returning more or less to its landing area and then north to circle around the largest crater on the map and then to head west to the base of the delta to the area labeled “Three Forks”, which is their entrance to the delta’s geology.