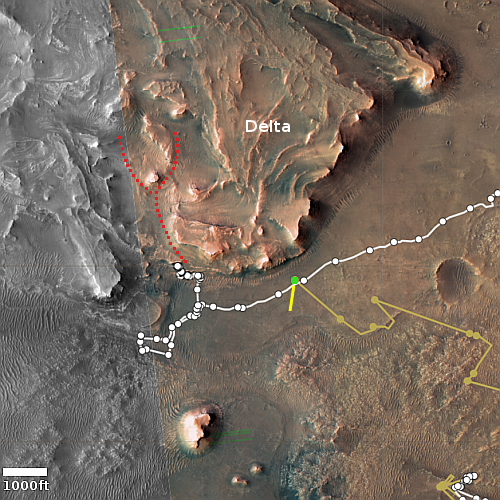 Based on this tweet posted yesterday, Ingenuity has successfully completed its 29th flight on Mars, placing it in “a better communication position with the rover.”

According to the helicopter’s flight log, the flight lasted about 66 seconds, was about 587 feet long, and had a maximum altitude of 33 feet.

On the overview map to the right the green dot marks Ingenuity’s position before the flight. The yellow line is my guess as to the approximate flight path for this 29th flight. In this new position the helicopter is better aligned with the hollow that Perseverance will climb (as indicated by the red dotted line), and will therefore also have better line of sight communications with it.

The flight itself tells us that the engineers have not only gotten the helicopter recharged, they have developed new flight software to compensate for the loss of a sensor that was used to determine Ingenuity’s elevation.

Because of the early arrival of the fall dust storm season, the Ingenuity engineering team decided to delay the helicopter’s 19th flight on January 5th, rescheduling it to no earlier than January 23rd.

In the days following the flight delay, the dust storm moved over Jezero crater, and we were able to clearly see its effects in both MEDA data and from orbit (Figure 1). Most notable was a sharp drop in air density – about a 7% deviation below what was observed pre-dust storm. This observed decrease would have put density below the lower threshold of safe flight and would have imparted undue risk to the spacecraft. We also observed the effect of dust in the amount of sunlight absorbed by Ingenuity’s solar array, which fell well below normal “clear sky” levels, a drop of about 18%.

Though this flight postponement occurred two weeks ago, today’s update appears to be the first public announcement, which has been typical of the Ingenuity team. They generally announce planned flights just before take-off, but then provide no detailed update on what happened, sometimes for weeks.