Evidence of explosion in ’21 detected from orbital images of Chinese launchpad
June 15, 2022 9:46 am Robert Zimmerman 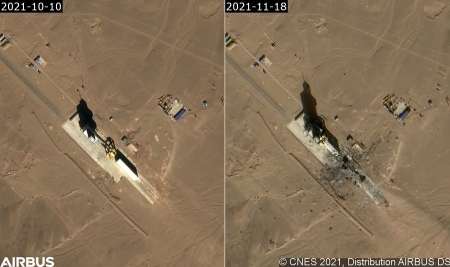 Using orbital images, an amateur space observer has detected evidence that an explosion had occurred at the Chinese Jiuquan spaceport some time in October 2021.

Evidence of the explosion was discovered by space enthusiast Harry Stranger using imagery from Airbus and CNES and posted on Twitter June 10.

The incident occurred at facilities constructed around 16 kilometers to the southwest of Jiuquan’s two main launch complexes. The pair of launch pads are used by the China Aerospace Science and Technology Corporation (CASC) for hypergolic Long March rocket launches for human spaceflight, civil, military and scientific missions and were unaffected by the blast.

At almost exactly the same time China had launched a manned mission from this same spaceport, so the explosion apparently was not related to that launch. Instead, the images suggest that this was related to testing of solid rockets, and could be related as well to the delay in any further launches of the Kuaizhou-11 rocket. According to a press release several months earlier, that rocket was being prepared for a launch by the end of 2021, but no such launch ever occurred.

A tour of the escape bunker under the Apollo launchpad.
November 20, 2012 9:04 am Robert Zimmerman

A tour of the escape bunker under the Apollo launchpad. With some great images.

Fingers crossed: Orbital Sciences expects to put its Antares rocket on the launchpad for initial checkout in about five weeks.

DARPA has launched a program to use airplanes as the launchpad for putting satellites in orbit
November 7, 2011 8:47 pm Robert Zimmerman

DARPA has launched a program to use airplanes as a launchpad for putting satellites in orbit.

The Pentagon’s research agency, the Defense Advanced Research Projects Agency (DARPA), also anticipates slashing small satellite payload costs from more than $30,000 per pound to less than $10,000 per pound — making such launches three times cheaper. . . . DARPA wants the program to demonstrate at least 12 launches of 100-pound payloads to low Earth orbit, with each launch costing about $1 million. Launches could start as soon as 2015, according to DARPA’s official announcement of the program on Nov. 4.

At first glance this appears to be good news for Orbital Sciences and its Pegasus rocket, the only commercial launch system that has successfully put satellites into orbit using a commercial L1011 airplane as its first stage. At the same time, however, it appears DARPA is pushing for new technology to lower costs below what Orbital charges, meaning the game is open to anyone.

Orbital Sciences has announced its revised schedule for the initial Taurus 2 and Cygnus flights.

Orbital will conduct a test of the Taurus 2’s first stage on the launch pad in late January [2012], and the inaugural Taurus 2 flight in late February or early March. This will be followed, in early May, by a Taurus 2 flight carrying the Cygnus station cargo vehicle, a flight during which Cygnus is expected to demonstrate its ability to berth with the station. The first operational space station cargo-delivery mission for Taurus 2 and Cygnus will occur in late August or early September under this revised schedule, Orbital officials said.

Based on conversations I’ve had with people at Orbital, this delay was expected, and is a good thing. The company was under incredible time pressure to get ready for a December launch. Given that this will be the first test flight of Taurus 2, and it must work for the Cygnus cargo flights to follow, better they give themselves some working room to get it right.

Delays in prepping the launchpad has forced Orbital to delay the first test flight of its Taurus 2 rocket.

SpaceX about to break ground on launchpad and hanger for Falcon Heavy
July 13, 2011 11:05 am Robert Zimmerman

SpaceX is about to break ground on launchpad and hanger for Falcon Heavy.

Atlantis is rolled out to the launchpad
June 1, 2011 1:29 pm Robert Zimmerman

The last shuttle mission: Atlantis has now begun its journey to the launchpad.

Very sad: A space shuttle worker has died from a Fall at the launchpad.