Capitalism in space: By raising its orbit by the use of sunlight only, LightSail-2 has confirmed what an earlier Japanese solar sail Ikaros had demonstrated, that it is possible to use solar sails to travel in space.

Since unfurling the spacecraft’s silver solar sail last week, mission managers have been optimizing the way the spacecraft orients itself during solar sailing. After a few tweaks, LightSail 2 began raising its orbit around the Earth. In the past 4 days, the spacecraft has raised its orbital high point, or apogee, by about 2 kilometers. The perigee, or low point of its orbit, has dropped by a similar amount, which is consistent with pre-flight expectations for the effects of atmospheric drag on the spacecraft. The mission team has confirmed the apogee increase can only be attributed to solar sailing, meaning LightSail 2 has successfully completed its primary goal of demonstrating flight by light for CubeSats. [emphasis mine]

The highlighted text notes a secondary but possibly more important engineering achievement here. LightSail-2 was launched as a cubesat. It has now proven that such a cubesat can include a solar sail and use it for purposes of transportation.

Moreover, that this engineering test was funded entirely by private funds proves again that the government is not necessary for great things to be achieved.

They will continue to raise the spacecraft’s apogee for the next month, until the lowering of the perigee causes the spacecraft to get pulled out of orbit by the drag from the atmosphere. That second process will still take about a year. 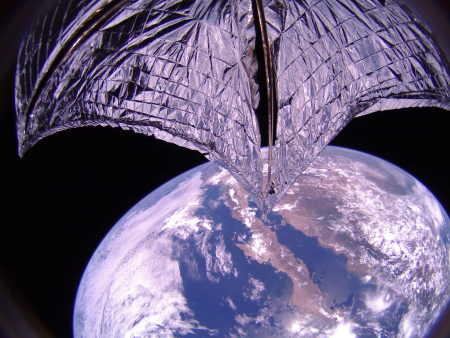 Capitalism in space: The LightSail-2 engineering team has now confirmed, based on images from the cubesat, that its light sail has successfully deployed.

Flight controllers at Cal Poly San Luis Obispo in California commanded the spacecraft to deploy its solar sails yesterday at about 11:47 PDT (18:47 UTC). Images captured during the deployment sequence and downloaded today show the 32-square-meter sail, which is about the size of a boxing ring, deploying as the spacecraft flew south of the continental United States.

Image caption: This image was taken during the LightSail 2 sail deployment sequence on 23 July 2019 at 11:48 PDT (18:48 UTC). Baja California and Mexico are visible in the background. LightSail 2’s dual 185-degree fisheye camera lenses can each capture more than half of the sail. This image has been de-distorted and color corrected.

To the right is a reduced version of this image. As they note, the sail is distorted because of the fisheye nature of the camera lens. Nonetheless, it looks like the sail is deployed, and will be able to do its job, testing how one maneuvers in space using only sunlight.

UPDATE: Rex Ridenoure from Ecliptic Enterprises emailed me to explain that the distortion is only seen in the image above, that the image at the link has been corrected for this (as noted in the caption above). If you compare the two, you will see that the Earth is round in the corrected image.

Since the sail is much closer to the lens, I remain unsure how much of what we see of its shape is real, or a function of the fisheye lens. Later thumbnails show the sail more flat and tightly stretched, suggesting that this image was taken during deployment.

All indications are that LightSail 2’s solar sail has deployed successfully. Flight controllers sent the deployment command at approximately 11:45 PDT (18:45 UTC). Telemetry showed the motor count increasing as expected, and the motor appeared to halt at the correct time. LightSail 2’s cameras also appeared to capture imagery as planned.

Once checked out, they will begin tests to see how they can use sunlight to change the light sail’s orbit, literally sailing in space.

The wonders of freedom: This mission was privately paid for and built by the Planetary Society.

The LightSail-2 engineering team has decided to attempt deployment of the light sail on July 23.

The spacecraft is a cubesat about the size of a loaf of bread. Once deployed, the light sail will be about the size of a boxing ring. If deployment is successful, they will then attempt to use the sail and sunlight to change the sail’s orbit, thus learning the techniques for using light to travel through space.

The Planetary Society’s LightSail-2 technology demonstration satellite was released from its carrier vehicle today and successfully established communications with the ground.

The CubeSat, about the size of a loaf of bread, was scheduled to leave Prox-1 precisely 7 days after both spacecraft successfully flew to orbit aboard a SpaceX Falcon Heavy rocket. Following deployment from its spring-loaded enclosure known as a P-POD, LightSail 2 deployed its radio antenna and began transmitting health and status data, as well as a morse code beacon indicating its call sign. The mission team received LightSail 2’s first signals on 2 July at 01:34 PDT (08:34 UTC), as the spacecraft passed over Cal Poly.

…The team will spend about a week checking out LightSail 2’s systems, exercising the spacecraft’s momentum wheel, and taking camera test images before and after deployment of the CubeSat’s dual-sided solar panels. Following the successful completion of these tests, the team will deploy the 32-square-meter solar sail, about the size of a boxing ring. A time for the solar sail deployment attempt will be announced later.

If they successfully deploy the solar sail and use it to maneuver in space, it will the second time the Planetary Society has done it, having deployed LightSail-1 in 2015. That mission has some communications problems, but eventually succeeded in its main engineering mission by testing the sail deployment system.

LightSail-2 will also be the third time a light sail has been flown in space, with the first, Ikaros, deployed by the Japanese in 2010 and flown in solar orbit through 2012. That mission was successful in using sunlight to accelerate the sail.