Lunar Reconnaissance Orbiter (LRO) has located the Chinese microsat lunar orbiter Longjiang-2, which was sent to impact the Moon in August 2019 after it completed its technology demonstration mission.

The image above shows the before and after of the location, with the satellite’s remains visible as indicated by the arrow.

Through a careful comparison of pre-existing NAC images, the LROC team was able to locate a new impact crater (16.6956°N, 159.5170°E, ±10 meters), a distance of only 328 meters from the estimated site! The crater is 4 meters by 5 meters in diameter, with the long axis oriented southwest to northeast. Based on proximity to estimated crash coordinates and the crater size, we are fairly confident that this new crater formed as a result of the Longjiang-2 impact.

The picture of the impact site might not be very impressive, but remember, this satellite only weighed about a hundred pounds. The engineering however is impressive, on all counts. First, the Chinese built a tiny cubesat that reached lunar orbit and operated there for more than a year, during which it even took a picture of the Earth. Second, the engineering team of LRO was able to find this tiny impact site for such small spacecraft in less than four months.

Chinese test microsat deorbits and crashes into Moon
August 2, 2019 at 10:05 am Robert Zimmerman Points of Information

The new colonial movement: A Chinese tiny smallsat, sent to lunar orbit to test the technology of such microsats, has been deorbited and allowed to crash into the far side of the Moon.

The micro satellite crashed into a predetermined area on the far side of the Moon at 10:20 p.m. on July 31 (Beijing Time), the center said Friday.

Weighing 47 kg, Longjiang-2 was sent into space on May 21, 2018, together with the Chang’e-4 lunar probe’s relay satellite “Queqiao,” and entered the lunar orbit four days later. It operated in orbit for 437 days, exceeding its one-year designed lifespan.

The development of the micro lunar orbiter explores a new low-cost mode of deep space exploration, said the center. The micro satellite carried an ultra-long-wave detector, developed by the National Space Science Center of the Chinese Academy of Sciences, aiming to conduct radio astronomical observation and study solar radiation.

China might be stealing a lot of the space technology it is using to make it a major space power, but it is also doing a fine job of refining and improving that technology. Its capability to do practically anything in space as well if not better than anyone else continues to grow.

And with their government using its space effort as a management test for determining the best individuals to promote into the government’s power structure, do not expect their space effort to wane anytime in the near future.

Chinese cubesat snaps picture of Earth and Moon from deep space
February 6, 2019 at 9:21 am Robert Zimmerman Points of Information 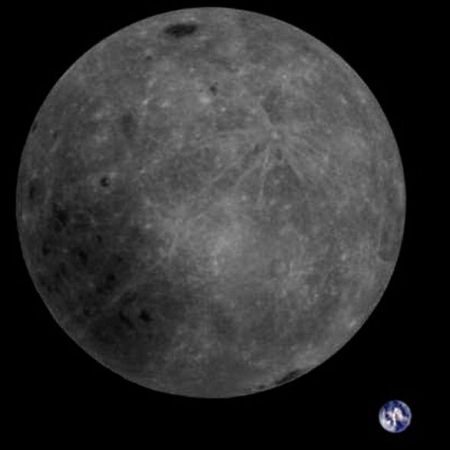 A interplanetary cubesat, Longjiang-2, launched with China’s communications relay satellite that they are using to communicate with Chang’e-4 and Yutu-2 on the far side of the Moon, has successfully taken a picture of both the Moon and Earth, as shown in the picture on the right.

Longjiang-2 is confirming what the MarCo cubesats proved from Mars, that cubesats can do interplanetary work.

And the picture is cool also. This was taken on February 3, when the entire face of the Moon’s far side is facing the Sun, illuminating it all. This timing also meant that the globe of the Earth would be entirely lit.