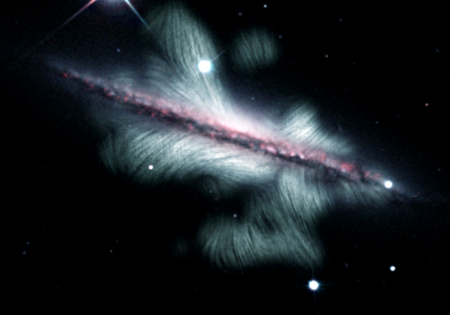 Using a variety of telescopes, especially the Jansky Very Large Array radio telescope, astronomers have successfully mapped the magnetic field lines of a spiral galaxy seen edge on and 67 million light years away.

The image to the right, cropped and reduced to post here, shows what they have found.

The magnetic field lines extend as much as 22,500 light-years beyond the galaxy’s disk. Scientists know that magnetic fields play an important role in many processes, such as star formation, within galaxies. However, it is not fully understood how such huge magnetic fields are generated and maintained. A leading explanation, called the dynamo theory, suggests that magnetic fields are generated by the motion of plasma within the galaxy’s disk. Ideas about the cause of the kinds of large vertical extensions seen in this image are more speculative, and astronomers hope that further observations and more analysis will answer some of the outstanding questions.

Our understanding of these kinds of gigantic magnetic fields is poor, to put it mildly. This data really only begins the research.

Astronomers have made the first detection in another galaxy of a magnetic field that extends out into the galaxy’s halo.

The image above, based on data from the Jansky radio telescope, illustrates what they found..

The spiral galaxy is seen edge-on, with its disk of stars shown in pink. The filaments, shown in green and blue, extend beyond the disk into the galaxy’s extended halo. Green indicates filaments with their magnetic field pointing roughly toward us and blue with the field pointing away. This phenomenon, with the field alternating in direction, has never before been seen in the halo of a galaxy.

“This is the first time that we have clearly detected what astronomers call large-scale, coherent, magnetic fields far in the halo of a spiral galaxy, with the field lines aligned in the same direction over distances of a thousand light-years. We even see a regular pattern of this organized field changing direction,” said Marita Krause, of the Max-Planck Institute for Radioastronomy in Bonn, Germany.

The galaxy, dubbed the Whale by the astronomers, is about 35 million light years away, and has a diameter of about 80,000 light years, slightly smaller than the Milky Way.