The competition heats up: India has successfully completed both a test launch of the first stage of its upgraded GSLV rocket as well as the suborbital deployment and splashdown of a test manned capsule.

More details are sure to follow, but at the moment it appears that everything went exactly as planned.

China heads for the Moon and Mars.

The landing test described in the first story above will also be the first test flight of China’s new heavy lift rocket, Long March 5.

That China is both politically and culturally serious about this effort can be seen by the nationalistic enthusiasm for this space effort that permeates these stories. They also can’t help comparing their plans to U.S. efforts.
END_OF_DOCUMENT_TOKEN_TO_BE_REPLACED

On Friday SpaceX unveiled its manned version of its Dragon capsule.
May 31, 2014 at 3:47 pm Robert Zimmerman Points of Information

The competition heats up: On Friday SpaceX unveiled its manned version of its Dragon capsule.

I am on the road this weekend so I won’t be able to comment about this until I get home.

One thing I can say. A quick scan of the news reveals a lot of stories about this particular event, showing once again that there is a lot of interest in the possibility of private development in space. This general interest is further fueled by SpaceX’s track record, which suggests that they will accomplish what they promise to do.

Planning the first launch abort test of the Dragon capsule.

The in-flight abort test will take place along Florida’s space coast. During the test, a Dragon spacecraft will launch on a standard Falcon 9 rocket and an abort command will be issued approximately 73 seconds into the flight. At that point, the spacecraft will be flying through the area of maximum dynamic pressure, or Max Q, where the combination of air pressure and speed will cause maximal strain on the spacecraft.

Dragon will be outfitted with about 270 special sensors to measure a wide variety of stresses and acceleration effects on the spacecraft. An instrumented mannequin, similar to a crash test dummy, also will be inside. The spacecraft’s parachutes will deploy for a splashdown in the Atlantic, where a ship will be pre-positioned for simulated rescue operations. The test spacecraft will be returned to Port Canaveral by barge so data can be retrieved and incorporated into the system’s design.

The test is presently scheduled for the summer of 2014.

An update on the Chinese manned program.
January 23, 2013 at 9:29 am Robert Zimmerman Points of Information

An update on the Chinese manned program.

The original script called for [the space station] Tiangong 1 to be followed by Tiangong 2, which would have been a module of the same basic design as Tiangong 1. Tiangong 2 was expected to have tested more advanced life-support systems than Tiangong 1, but there would be no major changes to the spacecraft. It was expected that two or three crews would be launched to this module.

Towards the end of the decade, China would then launch Tiangong 3, which was slated to be an entirely different class of spacecraft. It would be larger and more capable. Tiangong 3 was expected by some analysts to be a precursor to the types of modules to be used in China’s future space station, slated for launch around 2020.

In other words, China is accelerating the admittedly slow pace of their manned program.

China has spent $6 billion since 1992 on its manned space program.

The story describes how Boeing is considering upgrading the X-37B to become a manned ferry to ISS, thus putting it in direct competition with the company’s other manned capsule, the CST-100.

At the American Institute of Aeronautics and Astronautics’s Space 2011 conference in November, Boeing’s Arthur Grantz revealed that the company is studying a new derivative of the Boeing/USAF X-37B. The new X-37C would be 65-80% larger than the current B version. Launched by an Atlas V rocket, X-37C could carry pressurized or unpressurized cargo or 5-6 astronauts. Grantz is chief engineer in charge of X-37 at the Boeing Space and Intelligence Systems Experimental Systems Group .

The names of China’s second class of astronauts, kept secret by the government there, has been revealed by a stamp collectible.

The Painted Desert of Mars

Mars Reconnaissance Orbiter released this picture yesterday of what the Orbiter’s scientists have labeled “The crazy floor of Hellas Basin.” Below you can see a cropped image of only one part of the large higher resolution image. The NASA caption says that the wild colors probably “indicate that diverse minerals are present,” meaning that any settlers of the red planet will probably take a close look at this location with the reasonable hope of finding the resources they need to colonize a planet.

To me, these colors also indicate that this place on Mars would probably one of its most popular tourist spots. As I look at the image my eye instinctively wants to trace out the best trail route along the ridges and down into the gullies in order to give hikers the best view of this colorful terrain. 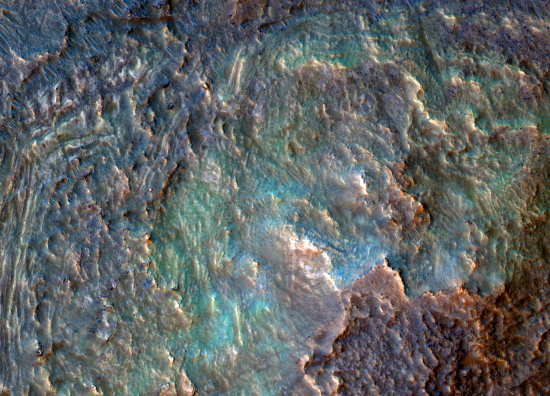 The story behind China’s planned space station begins to emerge
May 4, 2011 at 9:39 am Robert Zimmerman Points of Information

The story behind China’s planned space station begins to emerge.

China first said it would build a space station in 1992. But the need for a manned outpost “has been continually contested by Chinese space professionals who, like their counterparts in the United States, question the scientific utility and expense of human space flight”, says Gregory Kulacki, China project manager at the Union of Concerned Scientists, headquartered in Cambridge, Massachusetts. “That battle is effectively over now, however, and the funds for the space station seem to have been allocated, which is why more concrete details are finally beginning to emerge.”

Though I am always skeptical of comments from the Union of Concerned Scientists, in this case Kulacki makes sense. He also illustrates a further example of what I wrote in 2005, “After more than 40 years of debate, the argument is over and the supporters of manned spaceflight have won.”

The Russians have set the new date, April 5, for next manned Soyuz launch to ISS.