The floor of Marineris Valles
May 13, 2019 at 12:02 pm Robert Zimmerman Points of Information 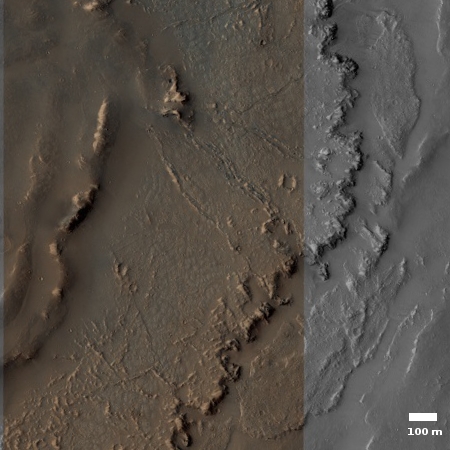 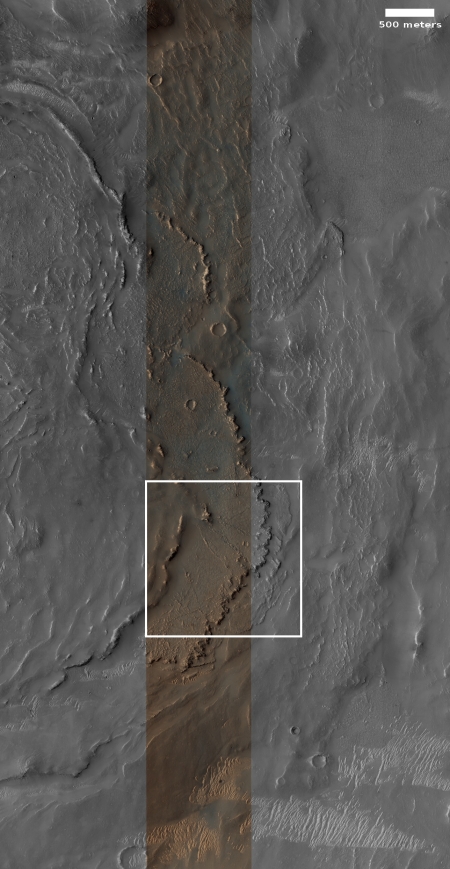 To the right is small section cropped out of an image, taken by the high resolution camera of Mars Reconnaissance Orbiter (MRO) on March 30, 2019, of one very tiny area of the floor of the 2,500 mile long Marineris Valles, the biggest known canyon in the solar system.

Below this on the right is a larger section of the full image, with the white box showing the part covered by the top photograph. The general flow direction is to the east.

The photograph, uncaptioned, is titled “Terminus of Pitted Materials Emanating from Oudemans Crater.” Oudemans Crater is about 55 miles across and is located near the head of Marineris Valles to the east of the giant volcanic region dubbed the Tharsis Bulge. The meteorite that caused this crater is estimated to have been a little less than 3 miles in diameter. It is believed by some scientists that the impact heated up subsurface carbon dioxide permafrost which then explosively flooded down the Valles Marineris into the Northern Plains of Mars, pushing a lot of pulverized debris in front of it..

Instead of liquid water, what is stored underground on Mars is liquid CO2 and when a collapse occurs, this boils almost instantly and explosively to CO2 vapour, blasting the rock and regolith to dust, except for the most resistant fragments such as igneous rocks. The rest of the regolith is composed of dust and gravel, weakly cemented by water ice. On Mars, water is not a fluid, but behaves as a mineral in most situations. Grains of ice would be tumbled along in the cryogenic flows, and transported as passive solids just like quartz grains are transported as sand by rivers on Earth.

This theory, if correct, would eliminate the need for liquid water on the surface, and would explain many of the planet’s geological surface features.

The overview thumbnail to the left shows the location of both Oudemans Crater and this MRO image, indicated by the very tiny blue rectangle near the thumbnail’s center..

The “pitted materials” in the image’s title refers to that flowing avalanche of pulverized ice, rock, and dust, shown in the picture by the curved terraced cliffs descending to the east. This is where this material settled as it flowed eastward, pushed by that explosive CO2 flood.

You can see another example of this eastward flow in another MRO image taken just to the west. The canyon floor is pitted, confused, and rough, but there is an obvious flow trend to the east.

In fact, much of the floor of Marineris Valles that has been photographed at high resolution is similarly rugged. It will be a challenge to explore this place, especially because we have only imaged a small percentage at high resolution. There is much there that remains unseen and unknown.