The scientists in charge of the tiny MASCOT lander dropped from Japan’s Hayabusa-2 spacecraft today released the results from the lander’s short seventeen hour observations of the surface of Ryugu.

They found that the asteroid has two different types of rocks (why is a mystery) and practically no dust.

Ralf Jaumann and his team were particularly surprised by the lack of dust: “Ryugu’s entire surface is littered with boulders, but we have not discovered dust anywhere. It should be present, due to the bombardment of the asteroid by micrometeorites over billions of years, and their weathering effect. However, as the asteroid has very low gravity – only one-sixtieth of that experienced on Earth’s surface – the dust has either disappeared into cavities on the asteroid or has escaped into space. This gives an indication of the complex geophysical processes occurring on the surface of this small asteroid.”

They also confirmed that the asteroid is a very fragile rubble pile.

“If Ryugu or another similar asteroid were ever to come dangerously close to Earth and an attempt had to be made to divert it, this would need to be done with great care. In the event that it was impacted with great force, the entire asteroid, weighing approximately half-a-billion tonnes, would break up into numerous fragments. Then, many individual parts weighing several tonnes would impact Earth,” says Jaumann, who is supervising the MASCam experiment, interpreting the observations. The asteroid is very similar to carbonaceous meteorites found on Earth, which date back 4.5 billion years. With an average density of just 1.2 grams per cubic centimetre, Ryugu is only a little ‘heavier’ than water ice. But as the asteroid is made up of numerous pieces of rock of different sizes, this means that much of its volume must be traversed by cavities, which probably makes this diamond-shaped body extremely fragile.

MASCOT was another example of a cubesat demonstrating that these tiny spacecraft can do very sophisticated science.

MASCOT’s journey on Ryugu
October 12, 2018 at 8:31 am Robert Zimmerman Points of Information 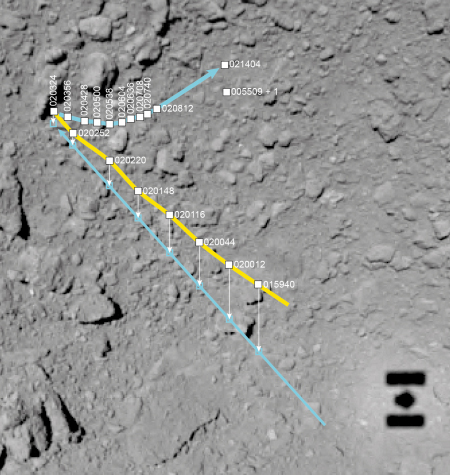 MASCOT’s German science team has released a summary of the lander/hopper’s results and seventeen hour journey across the surface of the asteroid Ryugu. The image on the right, reduced and cropped to post here, shows the spacecraft approach, landing, and numerous hops across the surface. If you click on the image you can see the full high resolution image.

Having reconstructed the events that took place on asteroid Ryugu, the scientists are now busy analysing the first results from the acquired data and images. “What we saw from a distance already gave us an idea of what it might look like on the surface,” reports Ralf Jaumann from the DLR Institute of Planetary Research and scientific director of the MASCOT mission. “In fact, it is even crazier on the surface than expected. Everything is covered in rough blocks and strewn with boulders. How compact these blocks are and what they are composed of, we still do not know. But what was most surprising was that large accumulations of fine material are nowhere to be found – and we did not expect that. We have to investigate this in the next few weeks, because the cosmic weathering would actually have had to produce fine material,” continues Jaumann.

The spacecraft apparently bounced eight times after first contact, then executed three hops. The rubble pile nature that is observed I think explains why the Hayabusa-2 science team decided to delay its own landing for a few months so they could figure out a plan. It really appears that Ryugu does not have any smooth flat spots, as expect. 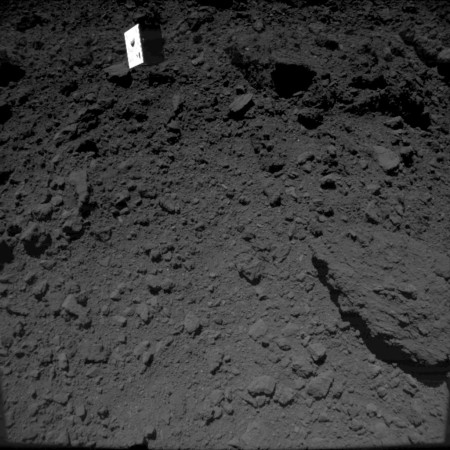 The Hayabusa-2 science team today released images taken of MASCOT as it descended to the surface of Ryugu, including images showing where it landed.

In the image on the right, reduced slightly to post here, you can see MASCOT as it slowly moves downward towards the asteroid shortly after its release from Hayabusa-2. At the link there is another image showing the mini-lander as a white dot when it was still about 115 feet above the surface. Other images show its location on the surface where it operated for seventeen hours and completed three hops.

The next big event from Hayabusa-2 will be the spacecraft’s own landing, sometime later this month.

MASCOT ends its mission on Ryugu, as planned
October 4, 2018 at 10:52 pm Robert Zimmerman Points of Information

Hayabusa-2’s mini-lander MASCOT has ended its mission on Ryugu after seventeen hours, slightly longer than the planned sixteen hours.

The lander made one hop, and successfully transmitted all its data back to Hayabusa-2, which still has one more mini-lander on board that will be sent to Ryugu’s surface, probably after Hayabusa-2 makes its own landing.

Meanwhile, the two Minerva-2 bouncers continue to operate on Ryugu. 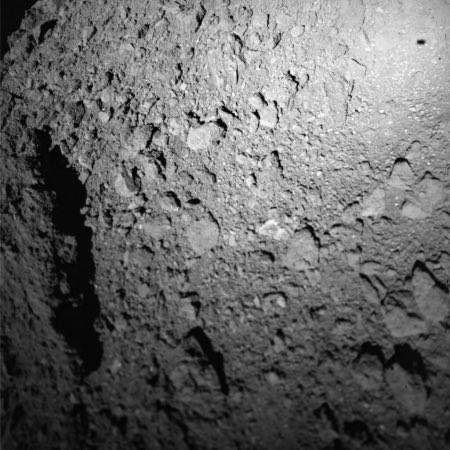 Update: The image at right, reduced to post here, was taken by MASCOT during its descent. You can see the spacecraft’s shadow in the upper right. If you click on the image you can see the full resolution version.

Original post: The German/French-build mini-lander MASCOT has been successfully deployed by Hayabusa-2 and has successfully landed on the asteroid Ryugu.

MASCOT came to rest on the surface approximately 20 minutes after the separation. Now, the team is analysing the data that MASCOT is sending to Earth to understand the events occurring on the asteroid Ryugu. The lander should now be on the asteroid’s surface, in the correct position thanks to its swing arm, and have started to conduct measurements independently. There are four instruments on board: a DLR camera and radiometer, an infrared spectrometer from the Institut d’Astrophysique Spatiale and a magnetometer from the TU Braunschweig. Once MASCOT has performed all planned measurements, it is expected to hop to another measuring location. This is the first time that scientists will receive data from different locations on an asteroid.

The spacecraft took 20 pictures during its descent, which were beamed to Hayabusa-2 where they are presently stored.

Deployment operations for Hayabusa-2’s MASCOT lander have begun
October 2, 2018 at 9:07 am Robert Zimmerman Points of Information

Engineers have begun the deployment sequence for Hayabusa-2’s MASCOT lander, with deployment planned for tomorrow.

Right now Hayabusa-2 is slowly moving closer to Ryugu, with live images appearing about once every half hour. More information about MASCOT can be found here. The lander can also hop like the MINERVA bouncers, but it can only do it once. Its battery life is about sixteen hours, so once it is deployed it will only operate on the surface for a short while.

Both the MINERVA and MASCOT mini-landers are mostly engineering tests for using small cubesat-sized spacecraft as probes. So far the MINERVA bouncers have been an unqualified success. Hopefully MASCOT will be as successfully.

At a press conference yesterday the Hayabusa-2 science team laid out their landing schedule for the spacecraft and its three tiny landers.

The first lander will be one of its two tiny MINERVA-II probes, and will take place in September. This will be followed by the German/French MASCOT probe in early October, followed in turn in late October by Hayabusa-2 itself.

The landings of the first two probes will help them pick Hayabusa-2’s landing site, as well as the site for last MINERVA lander.

Mission planners faced tough choices because the body almost uniformly strewn with boulders. “Ryugu is beautiful, but challenging,” said Aurélie Moussi, a collaborator from the French space agency CNES in Toulouse, at a press conference in Sagamihara, Japan, on 23 August.

…To minimize risks for MASCOT, mission planners mapped the topography of Ryugu and the distribution and size of the boulders on its surface. They ran computer simulations to produce a shortlist of ten options, and then picked one spot on the asteroid’s southern hemisphere. The choice reflected a number of criteria, including average temperatures on the ground and the materials that MASCOT will analyse with its four on-board instruments. “The other sites would have been just as good, or just as difficult,” says MASCOT payload manager Stephan Ulamec of the German Aerospace Center in Cologne. “Wherever we look, there is a lot of big boulders.”

It does appear that the boulder-strewn surface is posing a problem for the engineers.