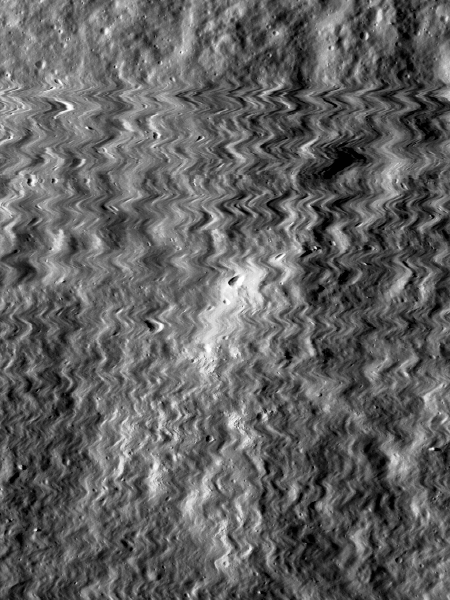 While taking an image in October 2014, Lunar Reconnaissance Orbiter had apparently been hit by some small object, causing it to vibrate and create the zig-zag distortions seen on the image, a cropped section of which is shown on the right.

Clearly there was a brief violent movement of the left NAC [Narrow Angle Camera]. The only logical explanation is that the NAC was hit by a meteoroid! How big was the meteoroid, and where did it hit? The physical properties and vibration modes of the NAC are very well known – during development a detailed computer model was made to ensure the NAC would not fail during the vibrations caused by the launch, which are severe. The computer model was tested before launch by attaching the NAC to a vibration table that simulates launch. The model was solid, both NACs survived the test, and launch.

Most of each NAC is sequestered inside the spacecraft structure, so only the leading edge of the baffle and the radiator are exposed to space, and thus are potential targets for impactors. From the detailed computer model, the LROC team ran simulations to see if we could reproduce the distortions seen the image. Assuming an impact velocity of 7 kilometers per second and a density 2.7 g/cm3, an impacting particle would have been 0.8 mm in diameter (~half the size of a pinhead). If the velocity was faster, then the particle would have been smaller, and if slower then larger.

The image is fascinating because you can see the vibrations slowly disappear as the zig-zags shrink and fade.