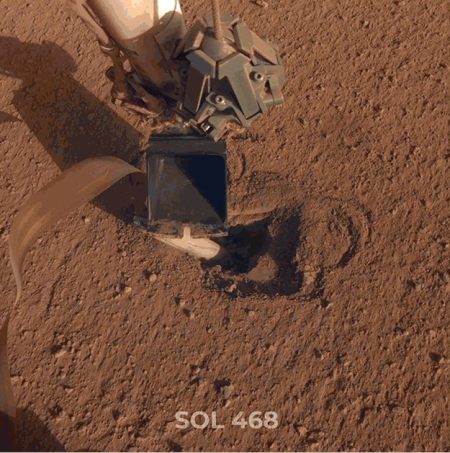 A new strategy devised in February to use the scoop on the Mars InSight lander to push down on the mole digging tool so that it could gain traction and dig downward has apparently had some success.

We started about seven centimetres above the surface on Sol 458 (11 March) and we are now at the surface with the scoop on Sol 536 (30 May 30), after six cycles of hammering over 11 weeks.

If you click on the image on the right you can see a movie assembled from images taken since February as they pushed down. The mole has clearly descended into the Martian soil about seven centimeters, or about three inches. The issue now, as shown in the movie, is that the mole is now deep enough that the scoop is pressed against the ground. It can’t really push down anymore on the mole, at least in this configuration.

They have the option of using the scoop’s tip to push farther into the ground, but that involves some risk. First they plan to let the mole continue to dig, without the scoop’s help, in the hope that it is now finally deep enough into the ground that the ground is finally able to provide the friction required to hold the mole in place. If this doesn’t work, they will then try using the scoop to fill the hole up to provide more friction.

If that doesn’t work, they will then try using the scoop tip to provide the added pressure.

All in all, it does appear there is now hope that the mole will eventually get the heat sensor for measuring the internal temperatue on Mars deep enough to do its primary mission. Stay tuned!

Even as InSight’s mole shaft driller shows signs of working, its difficulties in digging into the Martian soil has revealed how truly alien that soil is from what we normally expect.

[U]nlike typical holes dug here on Earth, the one excavated by InSight’s mole has no lip of dirt around its rim, Hoffman said. “Where did the soil go?” he said. “Basically, it got pounded back into the ground, so it seems like it’s very cohesive, even though it’s very dusty.”

And this is a weird combination of characteristics, strongly suggesting that Mars dirt is alien in more ways than one. “The soil properties are very different than anything we’ve ever seen on Earth, which is already a very interesting result,” Hoffman said.

That the soil of Mars is alien should not be a surprise. The planet’s dusty nature, combined with its light gravity and lack of life, practically guaranteed that the soil would have different and unexpected properties. What is disturbing is that it appears this likelihood was not considered in the slightest by the German engineers who designed the mole for digging.

Update on effort to save heat probe on InSight
September 16, 2019 8:38 am Robert Zimmerman

Link here. The article, written in late August by one of the German scientists in charge of the heat probe on the Mars lander InSight, gives a detailed look at the effort to figure out what is blocking the Mole, the digging tool designed to pound the heat probe as much as 15 feet into the ground.

They had discovered previously is that the ground had collapsed around the drill shaft, creating a very wide hole. The Mole however needed the friction caused by the surrounding dirt to push downward, and thus didn’t have it.

They have since used InSight’s scoop at the end of the robot arm to push at the ground around the hole in an effort to fill the hole. As of mid-August this has managed to fill the hole about half way.

This report was written on August 27, just before contact with Mars was lost for two weeks because the Sun had moved between the Earth and Mars. Communications have now resumed, so I expect they will also resume their efforts to fill the hole enough that they might then try to resume the digging effort.

Hat tip to Doug Messier of Parabolic Arc, who by the way is right now running his annual fund-raising drive for the website. Please consider donating.