Despite IAU disapproval, the space company Uwingu has announced another private commercial naming project for the craters of Mars.
February 27, 2014 at 12:54 am Robert Zimmerman Points of Information

The war of space names continues: Despite the disapproval of the International Astronomical Union (IAU), the space company Uwingu has announced another private commercial naming project for the craters of Mars.

Starting today (Feb. 26), anybody with an Internet connection and a few dollars to spare can give a moniker to one of the Red Planet’s 500,000 or so unnamed craters, as part of a mapping project run by the space-funding company Uwingu. “This is the first people’s map of Mars, where anybody can play,” said Uwingu CEO Alan Stern, a former NASA science chief who also heads the space agency’s New Horizons mission to Pluto. “It’s a very social thing.”

Sounds fun, and a clever way for this company to raise capital. Whether these names stick is an entirely different thing. Uwingu has as much right to assign names to objects as the IAU, but so far the IAU’s fake authority in this matter carries more weight.

The International Astronomical Union has issued a press release condemning the commercial efforts of private companies to issue names for exoplanets.
April 12, 2013 at 11:51 am Robert Zimmerman Points of Information

Turf war! The International Astronomical Union has issued a press release condemning the commercial efforts of private companies to issue names for exoplanets.

Recently, an organisation has invited the public to purchase both nomination proposals for exoplanets, and rights to vote for the suggested names. In return, the purchaser receives a certificate commemorating the validity and credibility of the nomination. Such certificates are misleading, as these campaigns have no bearing on the official naming process — they will not lead to an officially-recognised exoplanet name, despite the price paid or the number of votes accrued.
… [snip]
To make this possible, the IAU acts as a single arbiter of the naming process, and is advised and supported by astronomers within different fields. As an international scientific organisation, it dissociates itself entirely from the commercial practice of selling names of planets, stars or or even “real estate” on other planets or moons. These practices will not be recognised by the IAU and their alternative naming schemes cannot be adopted.

Well la-dee-da, how dare anyone else name anything ever in space!

The truth is, the IAU was originally given this function by astronomers to coordinate the naming of obscure astronomical objects, not to provide the official names for every object and feature that will ever be discovered in space. And though the IAU does tend to favor the choices of discoverers, it has in the past also ignored their wishes. (See for example my book Genesis: the Story of Apollo 8, where the IAU rejected the names chosen by the Apollo 8 astronauts, even though those astronauts were the first to actually go and see these features.)

In the end, the names of important features in space will be chosen by those who live there.

NASA scientists in a battle with astronomers over who gets to name things on Vesta and Mars.
August 22, 2012 at 10:01 am Robert Zimmerman Points of Information

A rose by any other name: NASA scientists are in a battle with astronomers over who gets to name things on Vesta and Mars.

This is not a new problem. The International Astronomical Union (IAU) has maintained its power over naming everything in space since the 1960s, even though the IAU has sometimes ignored the wishes of the actual discoverers and explorers and given names to things that no one likes. For example, even though the Apollo 8 astronauts wanted to give certain unnamed features on the Moon specific names, the IAU refused to accept their choices, even though those astronauts were the first human beings to reach another world and see these features up close.

Eventually, the spacefarers of the future are going to tell the IAU where to go. And that will begin to happen when those spacefarers simply refuse to use the names the IAU assigns. 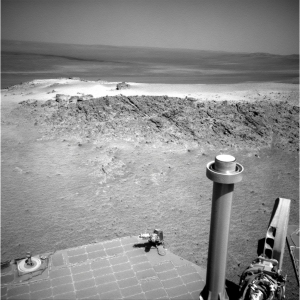