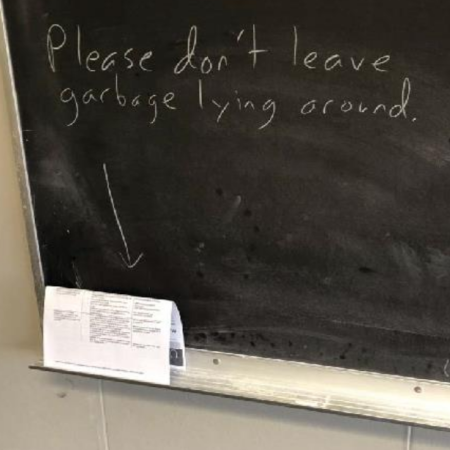 Speech that is forbidden at the University of North Texas

Nathaniel Hiers, fired by his boss as a math professor at the University of North Texas for daring to express a political opinion, has won a $165K settlement from the university.

This story is a follow-up on a previous column from March, when a judge had ruled that Hiers’ lawsuit could go forward. The judge also dismissed the university’s claim of qualified immunity for its officials, thus leaving them personally liable under any settlement.

The background: Hiers’ was fired when, having found flyers in math department’s lounge warning faculty against triggering “microaggessions” in their conversations, responded as shown in the picture to the right, placing one flyer on the chalk rack of the blackboard and wrote his own opinion of it above.

It appears that though the settlement was a victory for Hiers, paying him for damages and his attorneys’ fees, it does not get him his job back. Nor does it appear the officials who fired him wrongly will pay any of the settlement. Instead, the University of North Texas is picking up the tab.

Thus, this victory is not the triumph Hiers’ legal team, the Alliance Defending Freedom, claims it is. END_OF_DOCUMENT_TOKEN_TO_BE_REPLACED