The law is for the little people: Obama administration officials, including Vice-President Joe Biden, have been routinely using a closed lodge in Grand Teton National Park for their personal and family vacations.

Vice President Biden and several top White House officials have vacationed with their families at the same log cabin in Grand Teton National Park. Located on Jackson Lake, the rustic getaway is the perfect escape from the fast-paced Washington grind. The cabin also happens to be owned by the federal government, and was banned 20-some years ago by the National Park Service for anything other than “official use.”

This abuse is really not restricted to just elected officials. Park officials also often take advantage of their positions of power to use park facilities for their own pleasure that they ban the public from using.

Emails now show that the the closure of open access monuments that needed no staff during October’s government shutdown was planned by National Park management
March 10, 2014 at 7:19 pm Robert Zimmerman Points of Information

Petty fascist thugs: Emails now show that the the closure of open access monuments that needed no staff during October’s government shutdown was planned by National Park management.

The emails show that park employees knew there was no reason to shutter these monuments and doing so would actually cost money, something that made no sense since the shutdown was supposedly preventing them from spending money.

A House hearings yesterday, the partisan tactics of the director of the National Park Service was clearly illustrated by comparing what this government official did during the Occupy Wall Street protests versus his actions during the government shutdown.
October 17, 2013 at 10:27 am Robert Zimmerman Points of Information

Working for the Democratic Party: A House hearings yesterday, the partisan tactics of the director of the National Park Service were clearly illustrated by comparing what this government official did during the Occupy Wall Street protests versus his actions during the government shutdown. Watch:

The man should be fired. But he won’t be. Obama’s outrage over such activities is pure theater. He actually likes what Jarvis did, as it wholly supports the agenda of the Democratic Party.

The director of the National Park Service now claims that the barricades around memorials in DC were put there to protect them from terrorists during the shutdown.
October 16, 2013 at 8:10 am Robert Zimmerman Points of Information

The director of the National Park Service now claims that the barricades around memorials in DC were put there to protect them from terrorists during the shutdown.

What kind of fools do they take us for? This is downright insulting.

Like other states, they will pay the operating costs of the National Park Service, then get reimbursed when the government shutdown ends.

I wish they weren’t paying anything. They could have made sure the parks were open and available to all using state resources, and let the National Park Service throw a temper tantrum when it discovered it couldn’t control the parks.

Thousands of Americans have stormed the World War II memorial, as well as other barricades monuments in DC.
October 13, 2013 at 10:50 am Robert Zimmerman Points of Information

Occupy America! Thousands of Americans have stormed the World War II memorial today, as well as other barricaded monuments in DC.

More here. The first link above says that there was some “pushing and shoving” between protesters and the police at one location. This is not confirmed however. This story says the protesting vets were carrying the barricades to the White House.

Update: It appears the veterans are bringing barricades from all over and are using them to “barricade the White House.”

Privatize the National Park Service.
October 12, 2013 at 8:12 am Robert Zimmerman Points of Information

This recommendation will anger NPS employees. Well, for that, they can thank White House schemers for overplaying their heavy hand and unwittingly shedding ominous light on the abusive possibilities of this agency. That’s not a sentiment that the president and allies intended to foster when they began agitating and orchestrating their shutdown campaign. Rather than convincing us of the alleged evils of congressional Republicans, they’ve unveiled the roguish tendencies of some federal employees who blindly follow orders. Let’s respond by taking power away from those employees, so this cannot happen again. Easily maneuvered into providing propaganda for a president or party, these NPS workers have proven themselves unworthy of the mission entrusted to them. They are the embodiment of the dangers of unaccountable, big government.

To this I say amen! I spend a lot of time visiting the national parks, and more often than not have been consistently disgusted with the National Park Service and its possessive and dictatorial attitude. In the past two decades the park service has changed. Once it considered its job that of a mere custodian, administering these parks for the benefit of the American public, the parks’ real owner. Today the park service instead sees the parks as their private little playground, and the public as annoying trespassers whose access should be limited as much as possible.

It is time to fire these thugs and give the job to someone else.

Note also the ease in which state governments are taking over operations of the major parks out west. For less money too. This illustrates how bloated and unnecessary most of the park service actually is. It can be replaced.

“The Obama Administration’s behavior during the first week of the shutdown has been the best argument against Obamacare anyone has ever made.”
October 10, 2013 at 7:43 am Robert Zimmerman Points of Information

Another reasonable thought: “The Obama Administration’s behavior during the first week of the shutdown has been the best argument against Obamacare anyone has ever made.”

The American people do not want Obamacare, and they are demanding that Washington act to protect them from the harmful effects of this unfortunate law. The president’s response has been to ignore them, allow the government to shutdown, and then use his power to close national parks and monuments, stop paying veterans’ benefits, and cut off cancer research. This is exactly why we should not expand the government’s power over our health care choices. What power the government has, it will use – and misuse – to advance its own interests, even if that means punishing the American people along the way. [emphasis mine]

Just think what any power-hungry politician, from either party, might do if he or she had unfettered access to your personal health records. If you express any opposition to them, they might even use that information to attack and destroy you.

More defiance of the Obama administration’s attempt to lock Americans out of public lands.
October 10, 2013 at 5:59 am Robert Zimmerman Points of Information

Occupy America: More examples of defiance of the Obama administration’s attempt to lock Americans out of public lands.

The most telling quote from this story, however, is this statement by a park service spokesman about the first amendment exception they have instituted at the World War II memorial:

Michael Litterst, a National Park Service spokesman, said the First Amendment exception applies only to several Washington and Philadelphia parks related to the government and its history, “due to these parks’ long history of hosting First Amendment events, their expansive outdoor grounds, and their location in major metropolitan areas. You could not host a First Amendment rally at Chaco Culture, Grand Canyon, Manassas or any one of the 395 other parks where such activities are prohibited during the shutdown. They can be held only at the National Mall and Memorial Parks, the areas of the White House administered by the NPS, and Independence National Historical Park,” he said. [emphasis mine]

Since when is freedom of speech limited to only certain places, and those places are determined by the government?

The National Park Service is permitting a leftwing rally for illegal immigrants to take place on the National Mall, supposedly closed because of the government shutdown.
October 7, 2013 at 12:03 pm Robert Zimmerman Points of Information

Working for the left and the Democratic Party: The National Park Service is permitting a leftwing rally for illegal immigrants to take place on the National Mall, supposedly closed because of the government shutdown.

Much like the favoritism exhibited by the IRS, the park service is now clearly favoring leftwing protest. Want to gather at the World War II monument to celebrate the courage of Americans to free the world from Nazism and fascism? No! Want to gather on the National Mall to celebrate illegal immigrants? Yes!

National Park Service is proposing the removal of several historic bridges in Yosemite because they interfere with water flow, according to environmentalists.
July 8, 2012 at 5:55 pm Robert Zimmerman Points of Information

The National Park Service is proposing the removal of several historic bridges in Yosemite because they interfere with water flow, according to environmentalists.

Look, why don’t they simply admit it: They really want don’t want any humans to visit these parks, and simply outlaw them all? That way, the job of the National Park Service will be so much easier: They — and their environmentalist buddies — will finally have the park to themselves to play in without being bothered by all those disgusting American citizens. 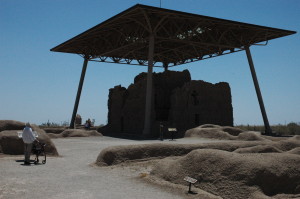